Back at the top of the table with a game in hand, Pep Guardiola’s side have re-established themselves as the team to beat

Manchester City defender Ruben Dias has had a similar transformative effect on the club as Virgil van Dijk did with Liverpool, Richard Dunne believes, with both sides having become immediately more solid at the back upon their arrivals.

Dias signed a six-year contract when joining City last summer and has quickly justified his £61 million ($83m) price tag with a series of excellent defensive performances and winning the club’s player of the month award in November.

The solidity and confidence now emanating from City’s back line is in stark contrast to that of Liverpool’s this season, with the Reds suffering badly due to the long-term injury sustained by centre-back lynchpin Van Dijk.

The Dutchman has been widely credited as being the missing piece of the puzzle that eventually led to Liverpool winning Champions League and Premier League titles, and Dunne feels that Dias has quickly carved out a similar reputation.

“The 5-2 defeat to Leicester in September was a shambles for City. But it’s what they did next that counts – they went out and bought Dias and he has been brilliant for them,” the ex-City skipper told Sunday World.

“I think he has changed that City team, helped get the best form out of John Stones. With the way they play, City will always create chances, they are now looking so confident going forward because they are so solid at the back.

“Dias isn’t what you’d consider a typical Guardiola player. He’s solid, he is good on the ball, but his first job is to defend. I was impressed with his first interview at the club when he said, ‘I’m a winner, I am a leader’.

“City didn’t want another ball-playing centre-back, they needed a central defender who could defend, who had that mentality of keeping a clean sheet, keeping his focus on doing that and leaving it to the attacking players to score.

“It’s not far off what Liverpool did with Virgil van Dijk. Once they got Van Dijk in, everything else seemed to just work well.”

With Dias’ presence having helped to solidify the defence, Dunne feels that City now have everything required to win the Premier League while other title chasers contend with various issues.

“Manchester City will be very, very hard to stop,” he said. “I can’t see any weakness in the City side. No one else is creating chances like them, they look to be a far happier squad than anyone else in the top six.

“City look like a side who are taking great pleasure in keeping clean sheets, they have Joao Cancelo able to move from full-back into central midfield, and they have that tactical nous that everyone else seems to be lacking. City were always vulnerable to counterattacks, now with Dias in the side they stop them before they start.

“Manchester United don’t have that, and neither do Liverpool, with Van Dijk out injured.

“They are growing as a team, their confidence is high at a time when everyone else in the top six is being tested, and even though they have lost Kevin De Bruyne, they have clicked. Every other team has problems, but it’s all falling City’s way now.”

Fri Jan 29 , 2021
The former Gunners favourite hopes the Norway international will end up signing permanently following his loan move from Real Madrid Arsenal legend Lauren has hailed the arrival of Martin Odegaard and has backed the “absolutely brilliant” Norway international to star in the Premier League under Mikel Arteta. Odegaard completed his loan […] 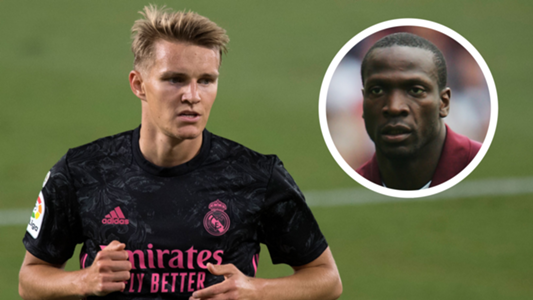