The Portugal international has slotted seamlessly into the fold at the Etihad Stadium, with his game all about keeping opponents at arm’s length

Ruben Dias is not concerned with becoming a modern defender for Manchester City, with the commanding Portuguese centre-half pointing out that his priority is always to keep opponents out.

Changes in approach down the years mean that those who were once asked to merely head and kick the ball are now required to offer much more to the collective cause.

Even ball-playing goalkeepers have become all the rage, with an ever-increasing number of coaches looking for their respective sides to play out from the back.

Pep Guardiola is very much in that category, with the City boss famed for his ‘tiki taka’ philosophy, but he is also aware of the need to find players that do their main job well.

Dias has shown on the back of a £62 million ($85m) move from Benfica that he is a no-nonsense defender, with the 23-year-old making no apologies for his old school mindset.

He has told the Daily Mail of his desire to defend first and play second: “The other day someone said to me here in the club, ‘Ah, amazing, another clean sheet’.

“I’m a defender. I’m there to defend. Nowadays the idea is that a defender needs to do much more. My focus has always been on becoming better and doing more but I’ve never forgotten that, first of all, I’m a defender.

“If not me, then who else will take pride from defending? It gives me pleasure to make the other team feel powerless.”

Dias has struck up a positive partnership with John Stones of late, with a ball-playing England international rediscovering his spark in 2020-21.

Collective effort is, however, responsible for City getting their season on track after a slow start, with everyone at the Etihad Stadium pulling in the same direction.

Dias added: “The connection with John has been just brilliant. But I would like to say that it’s not just me and John.

“A brilliant example of that, I think it was against Brighton. We were winning 1-0 but struggling and then I see Kevin [De Bruyne] and Gundo [Ilkay Gundogan] dying on the pitch. You know, running back, running forwards. Dying.

“Trust is given. Trust is earned. So when you start to build that defensive point of view, if we’re not conceding, we’re closer to winning, and then everyone starts to believe in it. They see your will to accomplish that. That makes this team strong.”

City have moved to second place in the Premier League table, two points behind arch-rivals Manchester United with a game in hand, and will be back in FA Cup action on Saturday when they take in a fourth-round clash with Cheltenham.

Sat Jan 23 , 2021
The duo underperformed yet again, raising questions as to whether either of the players have a future with the north London club Mikel Arteta has vowed that Arsenal will continue to throw their support behind Nicolas Pepe and Willian despite the pair putting in another forgettable set of performances as […] 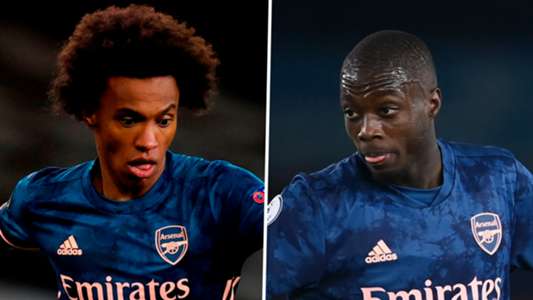