The promising United States international defender endured a Champions League outing to forget against PSG, but time is still on his side

Sergino Dest has been warned he “needs to learn” after enduring a nightmare Champions League evening against Kylian Mbappe, but Barcelona boss Ronald Koeman says he will be patient with the United States international.

Paris Saint-Germain ran riot at Camp Nou in the first leg of a heavyweight last-16 encounter, with their World Cup-winning frontman netting a stunning hat-trick.

USMNT right-back Dest found himself lining up against Mbappe in that contest, with the 20-year-old given a harsh lesson by one of the best in the business as to how tough life at the top can be.

Koeman has told reporters of Dest’s struggles on the continental stage: “Maybe because he has not been playing regularly and because he has had some injuries, that was an influence on his participation in the team.

The Barca boss added: “He’s a young player, that’s good, he can learn, but he needs to learn.

“With all the positives he can bring to the team, he [also] needs to learn it is a big step to play for Barcelona than to play in Holland. He needs time, he needs advice, but it starts with the player himself.”

How has Dest fared at Barcelona?

The Liga giants moved to buy into the promising defender’s potential during the summer of 2020.

A €20 million (£17m/$24m) deal was pushed through with Ajax, allowing Dest to open a new chapter in his career at Camp Nou.

He has taken in 24 appearances across all competitions this season, becoming the first American to score for the Blaugrana during an outing against Dynamo Kiev in November.

Dest made a positive start to his time in Catalunya, with plenty of plaudits earned along the way, but a steep learning curve means that he has to prove himself all over again.

Sat Feb 20 , 2021
The Ghana skipper and the Jack Army missed out on three points in their quest for elite division football on Saturday  Andre Ayew and Swansea City’s chase for Premier League promotion suffered a blip on Saturday by a 4-1 away loss to Huddersfield Town. Conor Hourihane drew the visitors level […] 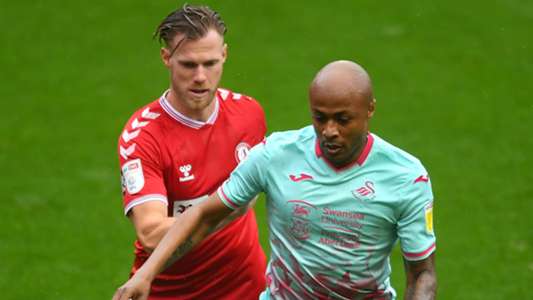