That is all for this evening, thanks for joining us as always. Goodbye!

Real Madrid keep pace with rivals Atletico Madrid and move to within four points of Diego Simeone’s side thanks to tonight’s victory. Atletico have two games in hand, but Zidane cannot ask any more of his team in the league at present. At the other end of the table, Alaves will be worried as they sit just one point above the drop zone, with two of the bottom three having played fewer matches.

The referee brings this crazy game to an end and Madrid extend their unbeaten run in the league to nine matches thanks to a clinical display in front of goal. Casemiro’s header got them off to a great start, before Benzema doubled their advantage. Hazard got in on the act before half-time, while Joselu’s header gave Alaves some hope. Benzema’s second of the evening soon put Madrid back in control, and they cruised to victory on their travels.

90′ + 2′ After a sloppy challenge on Mendy, Edgar is shown a card. It is hard to keep up with the number of yellow cards we have seen in the last ten minutes.

87′ Benzema is the latest player to time his tackle badly. The referee shows no sympathy, and he is booked as a result.

87′ Madrid clear the danger at the first opportunity and it remains 1-4.

86′ A late challenge from Mendy means he is shown a yellow card and Alaves now have a free-kick on the edge of the Madrid box.

85′ Sainz tries to plead his innocence, but he goes into the book with five minutes to go.

82′ Even though he is not present tonight, Zidane will be very proud of how his players have responded from their midweek defeat in the Copa del Rey. If they win this evening, it will be nine unbeaten in the league.

79′ A poor tackle from Laguardia sees him shown a yellow card with around 10 minutes remaining.

78′ Joselu’s goal is not enough for him to keep his place on the pitch and he is replaced by Deyverson.

77′ Asensio also makes way, with Isco getting just over 10 minutes to impress.

77′ After another solid night in the middle of the park, Modric earns his early bath, with Odriozola coming on.

75′ A couple of Madrid subs appear to be readying themselves to come on.

73′ He has had his fair share of critics over the years, but Benzema always delivers when Madrid need him the most.

72′ Pina makes way in midfield, with Riera on in his place.

70′ Modric’s pass could not have been any sweeter on that occasion. He curled it around one or two Alaves players before Benzema race away down the touchline.

70′ GOAAALLLL – ALAVES 1-4 REAL MADRID – Benzema delivers the goods once again for Zidane’s men, and that should be the three points in the bag for Madrid. He managed to stay onside after hugging the touchline, with Modric the man to spot him. A quick throughball later and Benzema did the rest thanks to a powerful run and neat finish.

65′ MODRIC!!! For the second time tonight, the Croatian tries his luck from 25 yards out, and Pacheco was needed as he denied him with a last-gasp save.

63′ Despite his first-half goal, Hazard is subbed off and replaced by Vinicius.

62′ Both sets of players are now seemingly taking it in turns to foul each other. It seems there is a lot of anger on the field of play, and that could work in Alaves’ favour as they try to rescue a draw.

61′ Joselu now has five goals against Madrid in LaLiga. A fine record for him to cherish!

59′ That was a nice moment for Perez. Just seconds after being booted into the air, he tees up Joselu for the goal.

59′ GOAAAALLL!!! ALAVEZ 1-3 REAL MADRID – Militao concedes the free-kick and is then beaten in the air by Joselu and Alaves have a goal back. His header from Perez’s cross was placed perfectly, leaving Courtois no chance in the Madrid goal. Game on!

59′ Militao seems to have decided that Perez deserves to be kicked for that foul on him earlier. The Madrid defender takes him out after the ball is played and he deserves a yellow card for that all day long.

57′ The Madrid physios have tended to Miliato, and he returns to the centre of the visitors’ defence.

55′ Now Militao goes down after a challenge from Pina. That looked more of a coming together though than a blatant foul.

52′ Sanchez now goes through the back of Kroos. That is two poor tackles inside four minutes; he is fortunate to still be on the pitch.

49′ Sanchez has not been on the pitch for more than five minutes and he is already in the book. He needs to be careful now!

48′ Alaves boss Abelardo Fernandez was clearly disgusted with that first 45 minutes from his team. Three changes at the break and he will be hoping for a quick response as his side try to get back into the match.

45′ One other change for Alaves at half-time as Navarro, who had been carded, is replaced by Sainz.

45′ Battaglia also makes way at the break, with Sanchez his replacement.

45′ Rioja succumbs to the shoulder injury he picked up in the first half, and Martinez enters the fray.

Alaves’ flying start is now a thing of the past. All their hard work has been undone by Madrid’s supreme quality in the final third, and the visitors will fancy their chances of scoring more goals in the second 45 minutes.

Without Zidane on the touchline, Madrid have turned up tonight, and they deserve plenty of praise. After already losing to Alaves and their recent defeat to Alcoyano, they have responded in fine style. Goals from Casemiro, Benzema and Hazard have put them in total control!

45′ + 1′ HAZARRDDDDDD! ALAVES 0-3 REAL MADRID – Alaves are punished after they tried to play the offside trap and it goes horribly wrong. The defence moved forward in different stages, and that allowed Hazard to race onto Kroos’ pass. Once he had brought the ball under control, he looked up and fired past Pacheco who was helpless in the Alaves goal.

45′ + 1′ Kroos’ pass could not have been timed any better for Hazard’s goal. He realised how poorly the offside trap had been played and picked out Hazard with ease.

43′ Madrid fully deserved their lead, and they still have time to grab a third before the break.

41′ Hazard continues to grow into this match, and his faint flick was played perfectly to Benzema for the second Madrid goal.

41′ WHAT A GOAL!!!! ALAVES 0-2 REAL MADRID – Benzema fires Madrid into a two-nil lead, and no goalkeeper is going to stop that shot! He received the ball after a backheel from Hazard. Alaves’ defence were slow to apply pressure, and Benzema punishes them with a powerful shot into the top corner.

40′ Further replays of that Varane incident suggest he was outside the box anyway.

38′ Alaves’ appeals for a penalty are also turned down after Varane’s header seemed to clip his hand. There was no intent at all, and the officials seem to have made the correct decision.

35′ Mendy avoids a yellow card and is very lucky to do so after a strong challenge on Navarro on the touchine. He tries to get him trouble by showing the referee his leg, but all appeals are ignored.

33′ Hazard looks up for this game, and it is great to see him back out on the pitch. His career at Madrid has yet to take off, but a regular run in the starting XI could soon change that.

30′ Alaves have lost their way a little and may need half-time to regroup. They are struggling to win the ball back in good areas and a second Madrid goal may not be too far away.

27′ WIDE! Hazard goes close after swapping to the right flank for a brief moment. The former Chelsea ace worked his way into the box after a quick one-two, but he couldn’t keep his shot on target!

25′ Despite the scare, Rioja looks to be returning after an intense examination from the Alaves medical team.

23′ The referee stops the game after Militao clashes with Rioja and the latter looks to be in some discomfort. He seemed to signal that his shoulder could have dislocated.

20′ Madrid striker Karim Benzema has been involved in eight goals in seven appearances against Alavés in LaLiga. However, the former Lyon man has not scored in three league visits to Mendizorrotza.

17′ That goal has given Madrid a real morale boost, and their players look rejuvenated as if the shackles are now off.

15′ Kroos’ delivery was superb from that set-piece, and Madrid will hope to kick on from here.

15′ GOAAAAALLL!!!!! ALAVES 0-1 REAL MADRID – The pressure proves too much for Alaves, and they fall behind after Casemiro’s header finds the bottom corner. The midfielder wrestled free from his marker from a corner and Pacheco had no chance of stopping that!

14′ BENZEMA!!!! The Frenchman has two opportunities to score, but somehow he fails to find the back of the net. His first effort was well saved by Pacheco, before his rebound hit the upright. Alaves get away with one there!

12′ Real Madrid are starting to find their feet now. Modric is the latest player to go for goal, but the former Tottenham ace sees his shot fly over the crossbar.

11′ Militao climbs above everyone in the box try and score the opening goal. He gets underneath the ball though and heads into the stands!

10′ Navarro is handed a yellow card after a late challenge on Mendy, and he concedes a free-kick right on the goal line.

8′ Alaves are trying to get into Madrid early here, they are flying into tackles, and the longer this goes on, the more unsettled the visitors will become.

6′ The home side have made a positive start so far, and Madrid have been forced to clear their lines quickly as a result.

3′ JOSELU!! The Alaves striker tries his luck from inside the box but fails to keep his header under control, and his effort flies over the crossbar.

1′ We are underway in the Basque Country!

Kick-off is moments away with both teams now on the pitch.

Alaves are hoping to record back-to-back league wins against Real Madrid for the first time ever after their 2-1 success earlier this season.

Alaves are unchanged after their 2-1 defeat to Sevilla last time out, while Zidane recalls Courtois, Varane, Mendy, Kroos, Modric, Asensio, Benzema and Hazard after their shock defeat to Alcoyano.

Alaves have failed to win any of their last four in the league, but they will try to take advantage of Zidane’s absence today. The Frenchman tested positive for Covid-19 earlier this week and will watch the game from home while recovering.

Real Madrid have now lost their last two games in all competitions, having failed to beat Athletic Bilbao in the Spanish Super Cup last week. Their results in the league are better though, having gone eight games without defeat.

Hello and welcome to our live coverage of the LaLiga clash between Deportivo Alaves and Real Madrid. Zinedine Zidane’s side will be determined to bounce back at the first opportunity after crashing out of the Copa del Rey in midweek to third-division side Alcoyano.

Sat Jan 23 , 2021
The former Reds midfielder believes that form will return to Jurgen Klopp’s squad, with one win all that is required to get them going again Liverpool’s weaknesses have been highlighted by Ray Houghton, with the former Reds star pointing out that Andy Robertson and Trent Alexander-Arnold have not been at […] 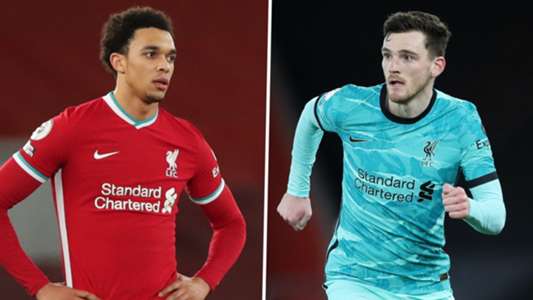