Kevin De Bruyne found it “bizarre” playing in the striker position in Manchester City’s 3-1 win against Chelsea on Sunday.

With Gabriel Jesus out due to coronavirus and Sergio Aguero on the bench as he works his way back to full fitness, the Belgium international playmaker started at the front of the attack at Stamford Bridge.

De Bruyne adjusted well to his new spot, registering a goal and an assist as his side sealed the three points in the Premier League clash. He admits it took some time getting used to the change in position but was happy with his team’s performance overall.

He told Sky Sports: “Bit bizarre in the beginning, I’ve done it a few times in my career obviously we have a lot of forwards out and the coach asked me to do this job, so I tried my best to do it as good as possible.”

De Bruyne added: “I think after five or 10 minutes we found our rhythm – the beginning was a bit lacking and I was in a bit of a different role today but after that we played very well. We took our chances at the right time and defensively were solid for 90 minutes. It’s a shame we conceded that goal in the last minute.

“We have different players so we play different this year so we have adjusted to our personnel, but the team is finding more rhythm in the last month we are playing better. When we had chances today we took them and leading 3-0 at half-time meant we could play more realistic in the second half.”

The victory extended City’s winning streak to four matches, while they are unbeaten in 11 in all competitions.

They are now four points adrift of leaders Liverpool, though Pep Guardiola’s team have a game in hand and De Bruyne hopes they can maintain their good run of form.

“It’s important that we win one of these big games. This season we have played some good games but not won any of them so today we have shown we can win the big games,” he said. “We’re still fighting an uphill battle but we are getting closer, that’s all we can do now.

“The years we were champions we were winning these big games – it’s a bit different this year because everyone is losing points. We had a bad start but we are coming back a bit so it’s a good thing we’re here fighting and that’s all we can do now.

“I don’t really have an explanation for [the strange results this season] – it is what it is. Every game we play there’s never a feeling it’s going to be easy. You need to be here 100 per cent for every game. If you’re only at 95% then you’re not going to win the game and that’s what a lot of teams have done this year.”

Sun Jan 3 , 2021
Messi has led by example and tries his luck on two occasions, but Koeman will still be pleased with the first 45 minutes. Barcelona have looked confident and worked well as a team; now they just need to kill the game off in the second half. De Jong’s goal is […] 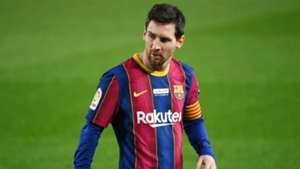