Vancouver Whitecaps FC have confirmed the signing of Nigerian forward David Egbo, their first selection of the 2021 MLS Super Draft.

The 22-year-old, whose contract expires in 2024, will officially join the Blue-and-White pending the receipt of his medical, work permit, visa and International Transfer Certificate.

In his last season with the Zips, the forward led the Mid-American Conference per-game averages of 0.75 goals and 4.00 shots and placed second with 0.75 assists while wearing the captain’s armband as a junior.

Vancouver boss Marc Dos Santos has no doubts over the potential of the Nigerian, while revealing his move to BC Place, Vancouver would aid his growth.

“David has a very good profile. We like his work rate and qualities that can complement our current group of attackers,” the Canadian tactician told the club website.

“This will be his first experience at this level, and we will provide him the opportunity to grow and develop.

“We are very pleased to add David to our team and look forward to welcoming him to Vancouver in the coming weeks.”

For the Kaduna-born star, who helped the University of Akron win the MAC Tournament title and secured a College Cup runners-up finish in 2018, he expressed his delight with his latest move.

“I am very excited to sign my first professional contract with Vancouver Whitecaps FC,” said Egbo.

“I can’t wait to start playing and winning with my new teammates.”

Following his move, he becomes only the third African in Dos Santos’ team after Leonard Owusu (Ghana) and Jasser Khmiri (Tunisia).

Egbo was recognised with a United Soccer Coaches All-America Third Team selection in 2018, as well as All-MAC First Team honours in his last two seasons.

He also featured for Black Rock FC in USL League Two in 2018, recording a goal and an assist in seven appearances.

Whitecaps FC, who finished ninth in the Western Conference last season, currently boast of 28 players under contract for the 2021 MLS season including 16 players 23-years-old or younger.

Tierney out of Arsenal's game with Wolves, Aubameyang back in training

Mon Feb 1 , 2021
Scotland star Kieran Tierney is being bugged by a calf complaint. Arsenal have confirmed Kieran Tierney will miss Tuesday’s Premier League game with Wolves, but the Gunners have been boosted by Pierre-Emerick Aubameyang returning to training. Tierney sat out Arsenal’s 0-0 draw with Manchester United at the Emirates Stadium on Saturday […] 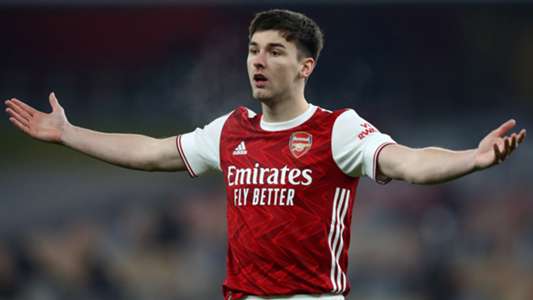