Three-time ATP champion Damir Dzumhur is honored to be a part of the Adria Tour. Dzumhur, ranked at No. 107 in the world, was rewarded with an Adria Tour wildcard after he beat Nikola Milojevic in the final of the tournament organized by the Serbian Tennis Federation.

Novak Djokovic, Dominic Thiem, Alexander Zverev, Grigor Dimitrov and several Serbian tennis stars will compete in Belgrade over the weekend. “Those are all great players. Even without the players who come outside Balkan, the player field includes good names Filip Krajinovic — who is just outside the top-30 — Dusan Lajovic — who is inside the top-30 — Viktor Troicki — a former world No.

12. It’s really an honor to find myself among players like this and that was the main reason why I fought so hard in this tournament. My main goal was to win this tournament, get a wildcard and have a chance to be around these guys,” Dzumhur told Sport Klub.

Dzumhur a big fan of football

The stats featuring on the Adria Tour played a football match on Thursday. Dzumhur woke up sore on Friday but he managed to recover from a set down to beat Milojevic 0-6 6-3 6-2. “Obviously, it always has to be dramatic when I play.

I had watched Nikola’s last two matches and obviously he was playing great throughout the whole tournament and I knew it would be a tough match. I had two lengthy matches and then I played a football match with other tennis stars on Thursday and I was really sore when I woke up on Friday morning.

It was tough to imagine that I would be a playing a match on Friday afternoon,” Dzumhur said.
“Whatever I play, I always give my best. Football is a big passion of mine and everyone who follows me knows that. It was to resist the chance (to play a football match in Belgrade against other tennis stars).

But wasn’t sore only because of the football match — I had played two lengthy tennis matches and we hadn’t played tournaments in a long time and that’s completely dfifferent from practice matches. I think that was the biggest factor in me being so sore.

Honestly, after the first set it was to imagine that I would make a comeback but somehow I found a way to motivate myself, get my legs going and when I started feeling my legs everything changed.” It remains to be seen how will former world No. 23 Dzumhur perform against some of the biggest names of the game in Belgrade.

Sun Jun 14 , 2020
The Mizoram-born striker missed the entirety of the previous season with an injury… Chennaiyin FC’s trusted striker, Jeje Lalpekhlua, last played a competitive game more than a year ago when he featured in a 1-0 win over Abahani Dhaka in the AFC Cup. With a knee injury plaguing him, Jeje […] 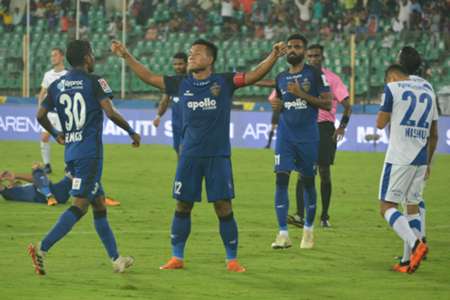