A serious discussion point on five-a-side pitches and barstools across the world, the issue of which player is the greatest of all time persists

Cristiano Ronaldo versus Lionel Messi – who is the GOAT?

The question of who is better between the Portuguese phenomenon and the empyrean Argentine has dominated the minds of football fans everywhere for the past decade and will persist into the future.

Club and national loyalties can cloud judgement on the matter, while personalities also play a part in how good a player is perceived to be, and most people know who they’d pick.

So who really is the greatest of all time? Never mind who you prefer, Goal has taken a look at how the pair actually shape up head-to-head so you can be fully armed with facts in the eternal argument.

Ronaldo has scored more club goals than Messi, but only just and it should be noted that the Juventus star benefits from having played two more seasons than his Argentine nemesis thus far.

Each of them has remarkably netted over 630 club goals in their career so far, with the five seasons between 2009-10 and 2014-15 proving particularly golden as they pushed each other to greater heights.

While Ronaldo currently has more goals overall, Messi has the edge in the scoring department, with a higher season average (40 to 35), having hit a high of 73 goals in 2011-12.

Interestingly, while Ronaldo’s seasonal totals have declined somewhat in recent years – he failed to break the 30-goal mark in 2018-19 during his first season at Juventus – Messi’s have remained consistent.

When it comes to assists, Messi is much superior to Ronaldo and that contrast has become increasingly stark as their respective roles evolve.

The fact that Messi creates so many goals as well as scoring them is a major consideration when deciding which player is the GOAT and, while Ronaldo chips in with his fair share, the difference in this particular realm is clear.

Ronaldo is the all-time leading goalscorer in the Champions League, having shone in the competition with Manchester United and Real Madrid in particular.

However, Messi isn’t far behind and actually has a fractionally better goal-per-game ratio, so there is a good chance that he could overtake the Juventus man if he continues to sparkle for Barca in the competition .

When it comes to World Cups, Ronaldo and Messi are considered underperformers and probably with good reason.

Portugal star Ronaldo has scored more goals at the tournament and in fewer appearances, but Messi can claim to have gone furthest, having reached the final with Argentina in 2014. The Barca attacker won the Golden Ball during that tournament, despite missing out on the ultimate glory at the hands of Germany.

The furthest Ronaldo reached with Portugal was the Selecao’s run to the semi-final in 2006, when they were beaten by France before losing the third-place play-off against Germany.

Ronaldo and Messi have similar records at international level, though Ronaldo boasts greater numbers, partly because his senior Portugal career kicked off two years before Messi’s with Argentina.

Messi is a long way behind Ronaldo in that respect, though he is by some distance Argentina’s top goalscorer of all time, surpassing Gabriel Batistuta.

Messi and Ronaldo have very similar trophy hauls, but Messi edges things when it comes to league titles, having won La Liga 10 times with Barcelona. Ronaldo has seven league titles, but unlike Messi, he can claim to have won the league in three different countries (England, Spain and Italy) – something that increases his claim to the GOAT crown in the eyes of some.

Ronaldo has an edge over Messi in the Champions League, his love affair with the competition earning him the moniker ‘Mr Champions League’. The former Manchester United star has also enjoyed notable success on the international stage, winning the European Championship and the UEFA Nations League.

Messi, on the other hand, has endured considerable heartache with Argentina, with four unsuccessful Copa America campaigns, three of which saw them lose in the final. While neither has won the World Cup, Messi has an Olympic gold medal.

The individual battle between Ronaldo and Messi has been the defining feature of modern football for the past decade and more.

Messi went ahead of Ronaldo in the Ballon d’Or stakes when he won his sixth in 2019 and it looks likely that he will stay ahead, with the 2020 award cancelled due to the coronavirus pandemic, meaning the next chance Ronaldo has of winning is 2021, by which point he will be nearly 37.

Messi has got his hands on the European Golden Shoe a record six times, which is two more than Ronaldo, and is marginally ahead of his rival overall, but the fact that both have been on the FIFPro World XI 13 times is an illustration of how closely fought the battle has been.

Tue Jul 28 , 2020
Barcelona Individual work on the pitches fcb Barcelona’s French trio of Ousmane Dembele, Clement Lenglet and Antoine Griezmann have taken significant steps forward in their recoveries from their respective injuries. Dembele has been out since the start of the year with a hamstring injury and Lenglet and Griezmann picked up groin […] 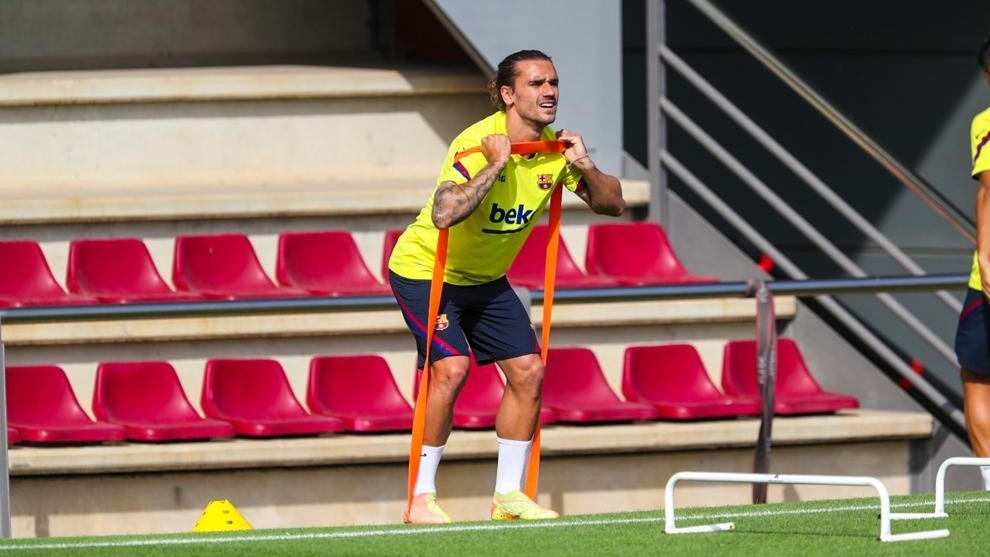