South Korean outfit Ulsan Hyundai are back at the site of their 2020 AFC Champions League triumph, in Qatar, for the FIFA Club World Cup which is set to kick-off on February 4.

The bio-bubble they currently are in is nothing new to the side, as they had experienced the same during the AFC Champions League a couple of months back. The entire East Zone matches and the grand final was held in Doha, at four venues.

Qatar’s ambassador to South Korea, Mohammed bin Ahmad Al-Hayki, believes that Ulsan can expect the same level of professional health and safety levels from the host nation for the Club World Cup as well. It must be noted that Ulsan’s former coach Kim Do-hoon had praised the arrangements and safety protocols in Qatar, especially during a time when most of the continent was reeling due to the pandemic.

Al-Hayki has assured the same level of commitment to current Ulsan coach Hong Myung-bo as well.

“The 2020 AFC Champions League hosted in Doha was the biggest sporting event with 900 players participating across East and West zones. So that’s a mega sporting event to host and to be able to control and administer. Therefore, during the pandemic and the COVID-19 issue, we have introduced certain protocols, enhanced testing and quarantine facilities in order to ensure and provide the players with the utmost possible healthy and safe environment to be in,” he told Goal.

“This is what coach Kim Do-hoon praised on several occasions, the health and protocol procedures that the Qatari authorities in Doha made available for the players during that game. We are of course very proud of the highly efficient protocol of health and safety set (by the Government of Qatar). We were, as a matter of fact, able to flatten the curve of COVID-19 in just few months from the peak of the outbreak in March and April. So thanks to our frontline workers during the Champions League, no positive cases of COVID-19 were reported. So this is a clear testimony that the health and safety of the players are paramount as far as we are concerned.

“And here I would like to avail myself of this opportunity to reassure the legendary Hong Myung-bo that he and his team can expect the same level of professional health and safety COVID-related protocol implementation so that they can play and compete in a very safe and healthy environment.”

So while most of the AFC Champions League (barring the final) was conducted behind closed doors, it is expected that the Club World Cup could see fans in restricted numbers (30 per cent fans in two venues) as was the case during the Amir Cup final and the AFC Champions League final where Ulsan defeated Persepolis in December. Al-Hayki feels the presence of fans is something Qatar will look to ensure while keeping the safety aspect in mind.

“We will look at all options as far as creating an environment conducing to promote the game but our main issue is of course safety and health here. So while we will be guided by the health protocols set by the Ministry of Public Health in Doha and I am sure that the organising committee will be in close contact with the committee in order to ensure the best possible environment and provide all the health and safety issues which are paramount. Therefore, we will look into the situation as it develops and we will act accordingly as far as the percentage of attendees is concerned.”

He went on to add that Qatar and South Korea have a history of hosting major sporting events like the Asian Games. South Korea also have co-hosted the World Cup, back in 2002. Now as Qatar prepares to host the continent’s second World Cup, Al-Hayki feels both nations have a lot to learn from each other’s experiences and share knowledge for the betterment of sport on the continent.

“We are very proud of our history of hosting mega sporting events. Whether it’s the Asian Games in 2006 or the preparation for the upcoming World Cup in 2022. And Korea is also the same, they hosted major sporting events. I think we can work together to learn from each other’s experiences and therefore, enhance the sporting games between us.

“And sports today is not only sports. It is a diplomatic and cultural bridge which brings people from different countries around the world, not only to watch football games but also to learn and understand more about each other’s cultures – be it in cuisine or music or in fashion, architecture and arts. There is a lot to learn from sports. Sports is now becoming something which is a major cultural event and not just sporting events.”

All-round Hyderabad FC show Chennaiyin exactly what they are missing!

Mon Feb 1 , 2021
The performances of Fran Sandaza and Joel Chianese must be assuring for coach Manuel Marquez as the ISL enter the business end of the season… After four consecutive draws, Hyderabad FC were in desperate need of a win when they met Chennaiyin FC on Sunday. Chennaiyin, themselves, were struggling a […] 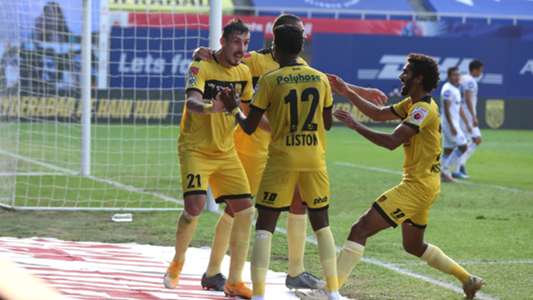