Emuidzhi Oghiabekhva hit her second competitive treble for Minsk this season as they claimed a 5-0 triumph over Gift Otuwe’s Neman in a Belarusian Women’s Premier League fixture on Sunday.

The Nigerian striker had scored her first hat-trick in a 10-0 win over Dnepr Mogilev in May and went on to repeat the feat against Neman.

Having returned from a two-week break, the reigning champions were desperate to avoid a slip-up against their second-placed visitors after their earlier home defeat to leaders Dinamo-BSUPC.

Ogbiabekhva finished off a fine pass from Yuliya Duben to put the hosts in front in the 11th minute before Cote d’Ivoire star Nagede Cisse set up the Nigerian to bag her brace in the 29th minute.

The 30-year-old struck from the front of the box to hit her treble of the match, increasing the tally to 3-0 three minutes from the half-time break.

The hosts picked up from where they left off in the first half as Tamila Khimich netted a fourth of the match from an assist from Ogbiabekhva, six minutes after the restart at Minsk Stadium.

Duben fired home a fifth with a bullet long-range effort in the 56th minute to complete the rout for the holders.

With her latest hat-trick, Ogbiabekhva, who played for 59 minutes of the tie, has now scored nine goals in six games this term for Minsk.

Cameroon’s Alvina Niyolle lasted the duration while Cisse replaced Nigeria’s Chioma Wogu, who only played for 23 minutes before she was taken off due to an injury after a clash with Otuwe.

On the other hand, Otuwe and Cote d’Ivoire’s Nina Kpaho featured for the duration while compatriot Aminata Haidara and Cameroon’s Moussa Xouwairatou lasted for 62 minutes each.

The triumph takes holders Minsk above Neman to the second position on goal difference, with the teams tied on 15 points after six matches but they are three points behind leaders Dinamo.

Minsk will visit ABFF U19 in their next league outing on June 19, while Neman are hosts to leaders Dinamo on the same day.

Sun Jun 14 , 2020
Real Madrid A stunning opener against Eibar AFP After three months out of action, Toni Kroos took just four minutes to find the net for Real Madrid against Eibar. The German midfielder sent a curling shot over the outstretched hand of Marko Dmitrovic and into the top corner to net his […] 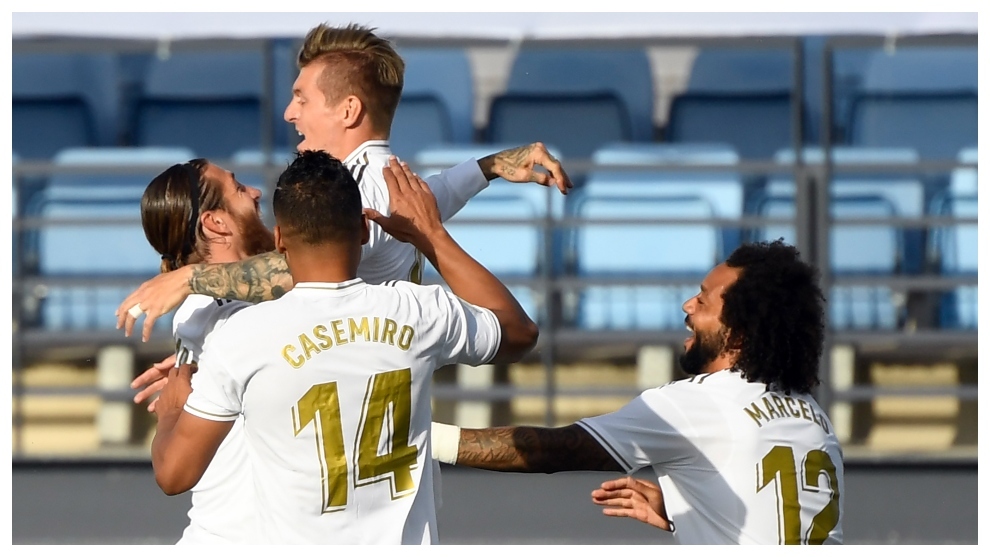