Mamelodi Sundowns reclaimed a six-point lead at the top of the Premier Soccer League table when they edged Chippa United 2-1 at Sisa Dukashe Stadium on Monday.

The Brazilians are now six points ahead of second-placed AmaZulu and they have played two games fewer than Usuthu as they push for a fourth-straight PSL title.

The victory also saw the Tshwane side surpass Kaizer Chiefs’ PSL record of going 19 matches unbeaten at the start of a league season during the 2014/5 campaign.

With Chippa extending their winless league run to nine games, they remained second-from-bottom where they have four points more than basement side Black Leopards.

Both sides lined up Ugandan goalkeepers with Chippa’s Ismael Watenga making his debut while Sundowns had Denis Onyango.

The Chilli Boys’ caretaker coach Siyabulela Gwambi started the match with their top-scorer Bienvenu Evanga on the bench together with former Sundowns stars Oupa Manyisa, Anthony Laffor, Thamsanqa Sangweni and Luyolo Nomandela, who came on in the 41st minute for Sizwe Mdlinzo.

Sundowns nearly went ahead just four minutes into the contest when Watenga almost palmed Shalulile’s powerful shot into his own net but had to thank the woodwork for saving him.

It took seven minutes for Masandawana to get their next chance as Zwane forced two Chippa defenders to combine to block his shot inside the box after some nice exchanges.

As Sundowns continued probing, Aubrey Modiba earned them a penalty after being fouled inside the box by Riaan Hanamub and Zwane stepped up to convert and record his ninth goal of the season.

The hosts gave little trouble to Sundowns with no realistic goal opportunities although Kwem showed some glimpses of potentially scoring.

Masandawana then spent the rest of the first half knocking the ball around but not finding a breakthrough mainly thanks to the Chilli Boys’ captain Frederic Nsabiyumva’s impressive defending.

A golden chance to double their advantage then came in stoppage time when Modiba released Shalulile for a one-on-one situation against Watenga who did well to narrow the angle and deny the Namibian.

Another one-on-one chance was blown up by the Brazilians as Zwane side-netted four minutes into the second half off a Shalulile supply.

As Sundowns players were recovering from that raid, Chippa launched a counter-attack leading to Gregory Damons setting up Kwem, who shrugged off the challenge of Rushine de Reuck to beat Onyango for Chippa’s equaliser.

That goal appeared to have injected some confidence into the hosts as soon after, Kwem narrowly missed the target with his head, before Onyango saved his effort from the edge of the box.

Now with the clock ticking, Sundowns upped their tempo with Sphelele Mkhulise forcing a desperate save from Watenga, while Mosa Lebusa headed just over the bar off a corner kick.

The winner for the visitors then came when Shalulile pounced on Lebogang Maboe’s headed rebound off the woodwork.

Shalulile, who like Zwane has nine league goals, almost grabbed a brace with two minutes remaining but his low shot hit the upright..

Mon Apr 12 , 2021
Thomas Tuchel’s side blew away Crystal Palace in their latest Premier League game, with a promising trident established in the final third Mason Mount is excited by the potential of Chelsea’s new-look front three, with the England international thriving for the Blues alongside Christian Pulisic and Kai Havertz. The young trio […] 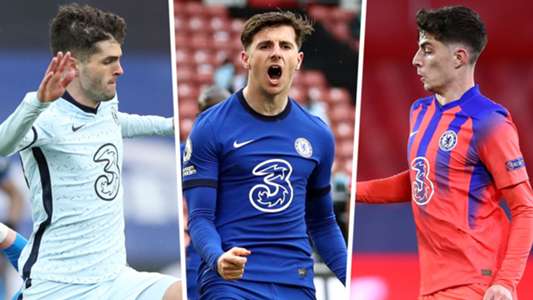