‘Vaccine for goalscoring’ is what Csaba Laszlo asked for after Chennaiyin’s yet another frustrating goalless draw, this time against Bengaluru in an Indian Super League (ISL) clash on Friday.

The result against Bengaluru was Chennaiyin’s eighth draw this season out of which six are goalless draws. The Marina Machans have managed to find the back of the net only 11 times this season, the least number of goals by a team. They are also the team with the most number of chances created this season which explains the Romanian-Hungarian coach’s disappointment.

New recruit Manuel Lanzarote made his debut for Chennaiyin and the veteran midfielder lived up to the expectations as he created chances aplenty. Operating just behind lone striker Esmael Goncalves (Isma), the Spaniard was a livewire on the pitch and had a huge impact in Chennaiyin’s forays forward. They had a total of 12 shots on goal compared to Bengaluru’s five and had six shots on target. Yet they failed to change the scoreline and had to settle for yet another tie.

Lanzarote’s addition has definitely strengthened the Chennaiyin side but his presence in the team will have no significance if they cannot finish the chances which the Spanish midfield creates.

Chennaiyin have missed the presence of a genuine number nine in their squad right from the beginning of the season. Laszlo has experiment every possible combination with his two foreign strikers Isma and Jakub Sylvestr but unfortunately, none of them are natural goal poachers.

Isma could have very well ended up scoring at least two goals if he was a bit more clinical in front of the goal but unfortunately, the Guinea-Bissau international, who has scored just one goal from open play this season, failed to take his chances.

Another player who has struggled when presented with chances is Indian international Lallianzuala Chhangte. The Mizo winger once again came close to break the deadlock in more than one occasion but failed to do so.

On a night when Chennaiyin attackers were extremely busy, their backline looked a bit more sturdy than usual. Bengaluru have been pragmatic in their approach and were looking to play on the counter more often than not. They did have their moments in attack towards the end but there was no doubt it was Chennaiyin’s game to take.

Blues head coach Naushad Moosa even admitted after the match that they were lucky to walk out of the game with a point. He said, “To tell you the truth, we were lucky. They got a lot of scoring chances but missed.”

It hasn’t been Chennaiyin’s year and with yet another draw on Friday they are now slowly drifting away from the play-offs spot. Chennaiyin have only four matches in the league stage and unless they find an immediate solution to their goal scoring woes, a top-four finish is out of the question.

Sat Feb 6 , 2021
NorthEast United are set to encounter a favourable run of fixtures… Since Khalid Jamil took over at NorthEast United, they have won three games in a row and recently held third-placed FC Goa to a draw to make it 22 points from 15 games.  The Highlanders, who now have the […] 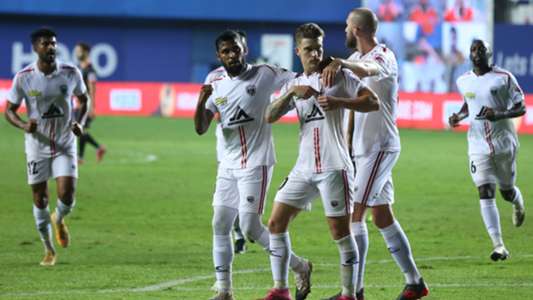