Thomas Tuchel has confirmed that Tammy Abraham and Kai Havertz are both available to face Southampton on Saturday.

The Blues will, however, be without Christian Pulisic and Thiago Silva as Thomas Tuchel’s side look to further cement their place in the Premier League’s top four.

Silva, who has been struggling with a calf problem, is back in training but isn’t ready to play a competitive match, while Pulisic is likely to miss out after suffering another minor muscle strain.

Editors’ Picks
What has Tuchel said?

“Thiago will be out, he’s not ready. And there’s some issues with the calf of Christian Pulisic, nothing big, it just feels tight, and he’s had a bit of soreness, so there’s a big question mark for Christian.

“Kai Havertz is back in training and can join us in Southampton.”

In what is proving a frustrating season for Christian Pulisic, the USMNT star has suffered another setback in a campaign that has seen him sustain several injuries.

Indeed, a nasty hamstring problem suffered in last season’s FA Cup final saw him miss the start of 2020-21 and various other injury complaints have restricted Pulisic to just nine league starts in the current campaign.

Despite his lack of match action, Tuchel was keen to underline that that former Dortmund star remains a key player for the west Londoners.

When asked if Pulisic is part of his long-term plans, Tuchel said: “Chelsea bought Christian for a reason, his quality and potential and it is our job to get the best out of him. He has proved in many weeks he has the level to be a regular Chelsea player.

“It is the challenge now to improve and hold his level and to maintain the level, keep improving.

“We are not concerned or worried but the medical department is on that (Pulisic’s injury troubles). We have little issues with the calf. He stopped training yesterday before it became an injury so I would not say it is an injury; it is risk management. And it relies on the history of injuries. We did not want to enter the same cycle.

“The main thing for Christian is to stay positive, keep his head up and be ready as he can have a big impact when he starts or off the bench with his intensity. There are absolutely no decisions made for the summer. There is simply not time for that.”

Fri Feb 19 , 2021
Bandari 2-1 AFC Leopards: Aussems starts reign at Ingwe with loss In another Kenyan top-tier game, Sofapaka fell to Ulinzi Stars at the Kericho Green Stadium Belgian Patrick Aussems started his reign at AFC Leopards with a 2-1 loss against Bandari at Mbaraki Stadium on Friday. William Wadri scored a […] 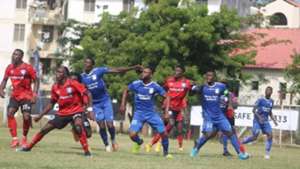