Uganda Cranes coach Johnathan McKinstry believes his team put up a performance filled with passion and desire despite going down 2-1 to Togo in a Group D game in the African Nations Championship competition.

Paul Mbowa scored an own goal to give the West Africans the lead, but Saidi Kyeyune equalized with a screamer before Richard Nane sealed the win in favour of the Sparrowhawks with a well-taken volley.

The Northern Irish tactician has now taken to Twitter to express his feelings and at the same time exuding confidence that his team will make it to the quarter-finals with a win over the defending champions Morocco.

“A performance filled with passion, purpose, and desire that unfortunately wasn’t able to bring us the result we craved,” McKinstry tweeted.

“Our attention now turns to our final Chan Group C game where a win over Morocco will see Uganda Cranes advance to the quarter-finals.”

A performance filled with passion, purpose & desire that unfortunately wasn’t able to bring us the result we craved.

Our attention now turns to our final @CAF_Online #TotalCHAN2020 Group C game, where a win over Morocco will see @UgandaCranes advance to the Quarter Finals

Currently, the Atlas Lions lead the pool with four points after a 1-0 win over the Sparrowhawks and a 0-0 draw with Amavubi. Togo are second owing to Friday’s win over the East African heavyweights while Rwanda come in third with two points.

The 2019 Cecafa Senior Challenge Cup champions are bottom of the group with a point.

In an earlier interview, the 35-year-old tactician said his charges have enough quality to advance.

“If we can produce the display especially that we had in the second half [vs Togo], which had a little bit more quality, we can get the results against Morocco,” McKinstry told Goal.

“And if that happens we will be in the quarter-final. So, people are disappointed now and everyone is after a loss, but we need to get our heads up. We know we have got the quality that is going to cause Morocco problems.”

The Cecafa champions have never progressed into the quarter-final of the tournament and McKinstry’s ambition was to break the jinx.

Despite the loss, the former Rwanda coach is hopeful the target is still achievable.

“As a nation, our target is to go deep into the tournament. I think we have three players who were in the tournament two years ago and the current one is a completely new team,” he concluded.

Sat Jan 23 , 2021
The Super Falcons midfielder has completed her transfer to the Spanish side after passing her medical and putting pen to paper Spanish club Madrid CFF have completed the signing of Nigeria midfielder Ogonna Chukwudi for the remainder of the 2020-21 campaign. The Madrid based outfit secured the Super Falcons star as a […] 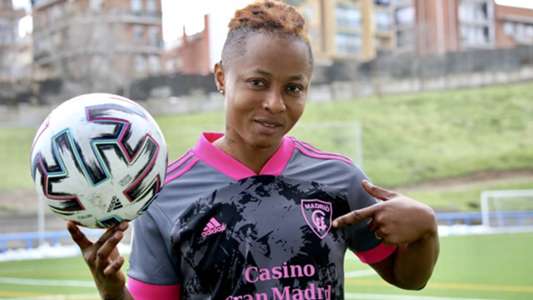