The Uruguayan frontman was snapped up by the Red Devils as a free agent in 2020, with Ole Gunnar Solskjaer buying into his vast experience

Edinson Cavani has explained how he became a fearsome striker with over 400 goals to his name and one that Manchester United bought into when he hit the free agent pool in 2020.

The experienced Uruguayan was snapped up by the Red Devils after severing ties with Ligue 1 giants Paris Saint-Germain.

He had plundered a club-record 200 goals for the French side, having previously passed the century mark for Napoli.

An impressive haul of 51 efforts have been recorded in the colours of his country, while the 33-year-old is already up to five in 17 appearances for United.

A reputation as one of world football’s most prolific strikers was established some time ago, with that standing preserved despite questions being asked of his advancing years.

Cavani continues to work as hard as ever on his game, with those at Old Trafford currently benefiting from his predatory instincts and boundless energy in the final third.

He told United Review on his progress to this point: “I always think that, in all aspects of life, a person’s maturity is important because it helps you to resolve problems more quickly.

“As they say, to find a short-cut and make things a little more straightforward.

“And it’s the same in football. I think that, in football, you start to gain in maturity, and begin to grow in experience and confidence. That means that, as the years pass by, you feel better in yourself, and feel in good nick and you start to feel that you can really compete, having been constantly involved.

“So yes, I feel that experience is hugely important. In spite of the fact that there are many talented guys out there, lots of gifted youngsters, I firmly believe, and I’ve always said that in football, it’s not all about having one, two or even three good games. What you really need in football is to compete hard and to be consistent.

“It takes a lot of self-discipline to enable you to become really consistent. For one, two, three, four years, that’s how you gain in the maturity which will enable you to get to that required level you need to compete.”

Cavani is looking to pass important lessons on to the likes of Marcus Rashford, Mason Greenwood and Anthony Martial at United, with his success achieved after mastering the art of being in the right place at the right time.

The South American added: “On many occasions, there are lots of strikers who score goals from more static positions.

“The ball comes to them, they can finish well, and they score goals. But you also have the other kind of striker who has the ability to sense things and anticipate where the cross is going to end up, or the ball in behind. Or when that through-ball is going to be played.

“I’ve worked really hard on anticipating the play intuitively. Looking at my team-mate to see where he’s going to play the pass, and watching the defender and how he’s moving so that I, in turn, can make a run or a move that will give me the advantage.

“And that’s something that you have to work on, and it’s also a question of focus and concentration on what you’re doing, and not just doing it naturally or for the sake of it.”

Sat Jan 23 , 2021
The Nigeria forward helped his Ghanaian teammate to score the match-winning goal at the Eryaman Stadium on Saturday Anthony Nwakaeme provided the assist for Caleb Ekuban to seal Trabzonspor’s 2-1 win over Genclerbirligi which extended their unbeaten run in the Turkish Super Lig to five matches. Earlier in the first-half, […] 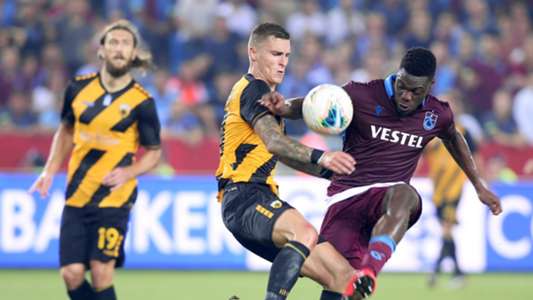