It’s a homecoming for veteran Indian goalkeeper Subrata Paul as he returns to his hometown and East Bengal after a gap of 13 years. The goalkeeper has joined the Red and Golds on loan from Hyderabad FC for the remainder of the 2020-21 season.

2007-08 season was the last time Paul plied his trade with a Kolkata giant and incidentally, his sojourn in his hometown ended with East Bengal. Before that, he had played for another Kolkata giant Mohun Bagan, where he started his professional career in 2004.

Kolkata has never been a happy place for the Bengali custodian. He has played a total of four seasons out of his 17-year-long career and has not tasted much success in terms of winning major league trophies or getting enough game time.

After graduating from the Tata Football Academy (TFA) in 2004, Paul joined the Green and Maroons. As a rookie custodian who was still in his teens, he hardly got game time. In the next two seasons, he mostly worked as an understudy to more senior goalkeepers like Prasanta Dora and Sangram Mukherjee.

With Mohun Bagan, the goalkeeper won six trophies (Two IFA Shields, two Airlines Gold Cup, one Federation Cup and one Calcutta Football League) in three seasons but he was hardly an integral part of any of those triumphs.

2007 was Subrata Paul’s breakthrough year in Indian football. He had by then won the then Indian national team coach Bob Houghton’s trust and became the country’s number one goalkeeper. Thus, his transfer to arch-rivals East Bengal ahead of the 2007-08 season garnered a lot of attention. Three other Mohun Bagan players Mehtab Hossain, Tomba Singh and Mehrajuddin Wadoo followed Paul to the Red and Golds.

Paul joined the Red and Golds after winning the famous Nehru Cup triumph in 2007 with the Indian team where his performance, especially in the final against Syria, gathered a lot of praise from all corners. Understandably, the Red and Golds loyalists expected a lot from the goalkeeper.

His journey got off to a perfect start at East Bengal as the Red and Golds, under the tutelage of Mohun Bagan legend Subrata Bhattacharya, won the Federation Cup in Ludhiana. They had beaten rivals, Mohun Bagan, in the semifinal and then defeated Mahindra United in the final to lift the trophy

With so many stars in their ranks including Paul, the Red and Golds had hoped to do a double of national titles but unfortunately, East Bengal’s performance in the I-League was abysmal as they finished on the sixth position.

Thereafter he went to Pune City where he played for three seasons before moving to fellow I-League side Salgaocar FC. He had also returned to Kolkata for a brief period and played for Prayag United in the 2012-13 I-League season. In the Indian Super League (ISL), Paul has played for four different clubs before rejoining East Bengal on Loan in January.

Paul, despite achieving almost everything in Indian football, both for the national team and at the club level, for a very long time has received criticism for not being able to perform for the Kolkata clubs where the fan pressure is immense. Being the son of the soil, the veteran goalkeeper in his twilight years will hope to prove his doubters wrong.

Thu Jan 28 , 2021
Plenty of chances but zero goals between Jamshedpur and Kerala Blasters on Wednesday… Kerala Blasters attempted 12 shots and created plenty of goalscoring opportunities against Jamshedpur in their 2020-21 Indian Super League (ISL) match on Wednesday.  They delivered one of their best performances of the season, only to come away with […] 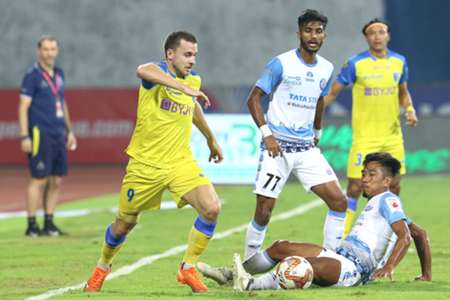