National Pension Scheme Authority Stars midfielder Daniel Adoko was happy to have helped his team achieve their dream of getting a win against Gor Mahia in the Caf Confederation Cup at Nyayo Stadium on Sunday.

The 21-year-old fired home in the 86th minute to complicate K’Ogalo’s chances of advancing into the group stage after dropping from the Champions League.

The Pensioners has now shed more light on what went on in his mind before shooting at goal, which handed his team a vital away win.

“We fought this battle as a team and I am happy we have achieved our dream,” Adoko told Goal.

“I saw the ball coming and I knew it was my moment to shoot. I did and it went in! It was wonderful; I was happy we worked as a team and achieved what the coach told us to do.”

Prior to that strike, the visitors had struggled to break down the East Africans’ defence. The midfielder has explained why it seemed so and also used the opportunity to pass the message to their supporters back at home.

“[The Gor Mahia defence was not strong], we stuck to the instructions the coach gave us of playing a defensive game since we were playing away,” Adoko added.

“It is the reason why we were defending more. Then we got one chance and took it.

“[The fans] should keep on supporting us and we will keep on fighting for them. We hope to see them back at home and we will give them a good result again.”

Meanwhile, the Pensioners head coach Mohamed Fathi has cautioned his players to stop celebrating after winning away.

With the return leg set for February 21 in Lusaka, the tactician has remained cautious, insisting the fixture is not won yet as they still have another 90 minutes to play.

“The game is not over yet,” Fathi told Goal. “We are celebrating here now and I have told my players that immediately we land in Lusaka; we must shift focus to the return leg.

Caf Champions League: Simba SC’s Mugalu on why he always scores vs AS Vita Club 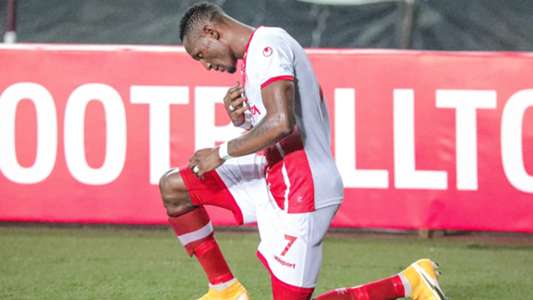