Asante Kotoko began their 2020-21 Caf Confederation Cup campaign on a bad note as they succumbed to a 2-1 home defeat to Algerian side ES Setif on Sunday.

Kwame Opoku broke the scoring for the Porcupine Warriors in the play-off fixture at the Accra Sports Stadium but an Amoura Mohammed effort and a Kendouci Mohammed strike turned things around for the visitors.

The Ghanaians, who were dumped into the Confederation Cup as a consequence of their elimination from the Caf Champions League, now have it all to do in the return leg on February 21. The winners on aggregate secure qualification for the group stage of the championship.

Kotoko started bravely as Christopher Nettey drove a shot which deflected off teammate Emmanuel Gyamfi into the hands of goalkeeper Sofiane Khedairia, Emmanuel Sarkordie fired a shot from outside the box over the bar and Keita hit the roof of the net with a header.

In the 27th minute, Toure made a scoring attempt for Setif but his effort, after being located by Merbah Messala’s in-swinger, went wide.

After Opoku saw a penalty shout ignored by the referee, the striker went knocking again shortly after but goalkeeper Khedairia reacted sharply to tip out the effort for a corner in the 32nd minute.

Three minutes to half-time, Imoro Ibrahim created space for himself near the visitors’ box but his shot just narrowly missed the target.

In the 68th minute, Opoku finally opened the scoring for the hosts with a cool finish into the right bottom corner after pouncing on Gyamfi’s through-ball into the box.

Ten minutes to full-time, the Algerians made it 2-1 through Kendouci’s close-range effort.

In the 84th minute, Kotoko were awarded a glorious chance to level the score when the referee pointed to the spot after a Setif player was adjudged to have handled in the box, but Keita’s strike from 12 yards was palmed away by the goalkeeper.

The hosts tried to find a late equaliser but their efforts proved futile as the referee brought the game to an end after three minutes of injury-time.

Sun Feb 14 , 2021
The Super Eagles forward returned to the scoresheet as the Canaries bagged their first league win since November Moses Simon opened the scoring as Nantes secured a vital 3-1 away win against Angers in Sunday’s Ligue 1 match. The Nigeria international inspired Antoine Kombouare’s men to grab their first win […] 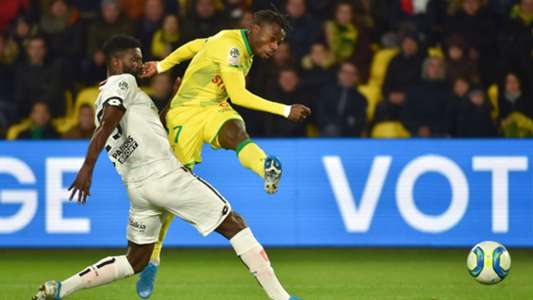