Simba SC striker Chris Mugalu has outlined two reasons why he has always scored against AS Vita Club whenever he plays against them.

The Congolese import was on target as the Msimbazi giants picked up a 1-0 win against Vita Club in a Group A Caf Champions League fixture on Saturday.

It has now emerged Mugalu has managed to score against Vita Club with three different clubs – Simba, Lusaka Dynamos of Zambia, and FC Lupopo of Congo – a feat he has tried to explain.

Mugalu said his desire to play for the DR Congo national team, which is currently being coached by Florent Ibenge, who turns out to be the current coach for AS Vita, has always pushed him to score against them so he can impress him for a national team call-up.

“That’s why every time I meet or play against him [Ibenge], I fight harder than usual to show him I have the potential to be called up to the national team and it is the reason I strive to score against him and the team,” Mugalu said as quoted by Sokalabongo.

“I know every time I show him the ability to play for the national team, he doesn’t call me, but with the fact I have shown the best level in this match [AS Vita versus Simba], I don’t see any reason why he should leave me out of the team.

“The second reason is that I was playing at home, I know the stadium very well and I want to show people back home that I still got it, I can play at the biggest level and my level of playing is very high, maybe better than the last time they saw me.

“I thank God because, before the game, I promised that I will score against AS Vita, and I did exactly that, the big thing now is that I was able to give my team the win and the vital points.”

“If my mind is settled without any issues affecting me, I can score many goals because that is my job, I can do it again and again.”

Mon Feb 15 , 2021
Ahead of a Round of 16 Champions League matchup with Barca, the midfielder said his team-mates are mindful of summer transfer possibilities Paris Saint-Germain’s fixation on Lionel Messi has not only been public facing, as Leandro Paredes told reporters the squad has discussed Barcelona’s star “a lot” in the locker room […] 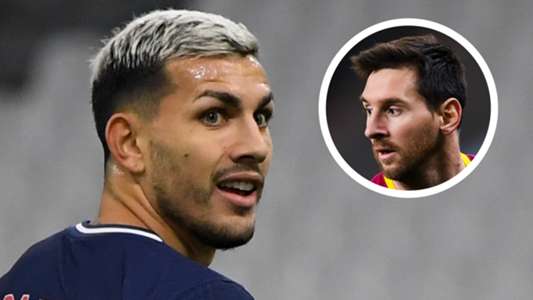