Wekundu wa Msimbazi are in Group A alongside defending champions Al Ahly of Egypt, AS Vita of the Democratic Republic of Congo, and Al-Merrikh of Sudan.

The 21-time league champions believe this is a good opportunity to market the East African country.

“Simba SC management and different stakeholders are aware of the goodness of our country,” the club’s CEO Barbara Gonzalez said during his meeting with the reporters.

“It is for this reason that we have decided to be ambassadors of our country through football.

“There was a space on our jersey and we decided to put a logo as well as our new slogan ‘Visit Tanzania. We will be using these jerseys in the Caf Champions League group stage.”

The CEO has further revealed the agenda will be pushed through other platforms as well as the club’s merchandise throughout the continental competition.

“We will play AS Vita in DR Congo, Al-Merrikh in Sudan as well as Al Ahly in Egypt, and we will also have three home games against the aforementioned teams,” Gonzalez added.

“We want to use the opportunity to market our country.

“Apart from jerseys, our masks and bags will also be branded with the slogan. And we will push the agenda through our social platforms as well. Our products and merchandise will also have the Visit Rwanda slogan.”

Wekundu wa Msimbazi will open their campaign with an away trip against the Black Dolphins on Friday, February 12, before hosting the Red Devils on Tuesday, February 23. They will then make a trip to Sudan to play the Leader on March 5.

The second round for the Tanzanian heavyweights will start with a home game against the Sudanese outfit on March 16 then host AS Vita on April 2 before finishing their campaign with an away game against the reigning champions on April 9.

Simba are aiming at reaching the semi-finals of the annual competition for the first time in their history. They are also eyeing the domestic league title as well as the FA Cup.

Fri Feb 5 , 2021
Bayern boss Hansi Flick is forced into a change in midfield as both Leon Goretzka and Javi Martinez miss out with knocks. Pavard, Sule, Alaba and Hernandez all start in defence as Kimmich starts in the centre of the park. Gnabry, Coman, Muller and Sane make up the attacking midfield […] 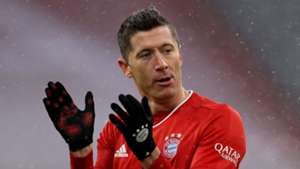