Simba SC coach Didier Gomez Da Rosa has praised his players for the away win they picked up against AS Vita Club in the first group match of the Caf Champions League on Friday.

Zambian striker Chris Mugalu scored the only goal at the Pentecost Martyrs Stadium, Kinshasa to fire the Wekundu wa Msimbazi to a 1-0 win over the Democratic Republic of the Congo side to go top of Group A.

Da Rosa, who was handling Simba for the first time in the competition after replacing Sven Vandenbroeck, has now said his players deserved to win the match as they were dominant in both halves of the contest.

“We are very happy and satisfied because my players put up the kind of game I had asked them to play,” Da Rosa told reporters after the match.

“We have come here and returned home with a very important win.

“As I said before, these are kind of results we need to make sure we get out of the group stage and reach the quarter-finals and we exactly got that, so the win is very vital for us and it will have some impact when we close group stage matches.

“I am happy for all the players, we created a number of chances despite playing away but I am happy we picked a win, against a team which beat us 5-0, the last time we met at the same venue, so this is an improvement from my lands and I am happy for them.”

It was AS Vita who started the match on a high, pushing for an opening goal from the wings. In the fourth minute, they won a free-kick in a good area when the captain of the night, Mohamed Husseini, controlled the ball and Ivorian Pascal Wawa headed the danger away.

The East African heavyweights came into the second half a much-improved side and prevented the Congolese from playing as freely as they did in the first half.

They were eventually rewarded in the 60th minute when midfielder Clatous Chama managed to get into a good position and cut the ball back to Luis Miquissone and the Mozambican’s effort was blocked by Ousmane Ouattara’s hand and the referee awarded the visitors a penalty.

Mugalu held his nerve to send Simon Omossola the wrong way and give his team a lead. Despite a spirited fight-back from the Black Dolphins, Simba held on to get maximum points and go top of their group. 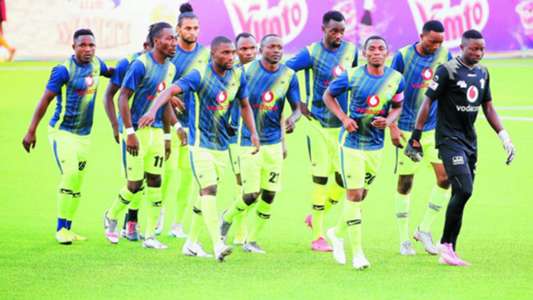