Simba SC head coach has named a 25-man squad to face Al-Merrikh in the Caf Champions League on Saturday in Omdurman.

The Msimbazi giants, who reclaimed top spot in Group A after beating Al Ahly of Egypt 1-0 in Dar es Salaam, will be out for what is their second away game at this stage.

Luis Miquissone, who was named the Caf player of the week after an impressive performance against the Red Devils and scored the only goal for the game, has kept his place.

Harambee Stars defender Joash Onyango, who equally had a good day against Al Ahly is in the squad and is likely to partner Pascal Wawa at the heart of the defence. Coach Didier Da Rosa has not made a lot of changes and is also expected to maintain the line up that started against the Egyptian Red Devils on Saturday.

Aishi Manula is expected to start in goal with Shomari Kapombe and Mohamed Hussein filling the full-back positions. Taddeo Lwanga and Mzamir Yassin could be drafted in midfield once more as Clatous Chama, Meedie Kagere and of course, Miquissone are set to spearhead the attack.

Wekundu wa Msimbazi have been promised Tsh200 million should they go on and record a third straight Group A win against Sudan’s giants.

Al-Merrikh, second to Al-Hilal in their domestic league, are at the bottom of Group A after a 3-0 away loss to Al Ahly before a 4-1 defeat at home to AS Vita of the Democratic Republic of Congo. However, Simba coach Da Rosa warned that they should not be underrated at all.

“They have already lost twice and the last time was at home but I know these players and the team very well, they are very dangerous at home and they have a squad of proud players who cannot allow losing three matches in a row in the competition,” Da Rosa said.

“Al Merrikh are one of the biggest clubs in Africa and so we must be very serious, ready, and convinced that we have the quality, the ability, and the discipline to get a very good result there.

“But to be honest, it will be a very big fight because like I said Al Merrikh cannot accept to lose three times consecutively so we must be ready but you know what we have already done against Al Ahly and if we are able to play like we did [against Al Ahly] in Sudan, we have clear hopes to win.”

Wed Mar 3 , 2021
The Blaugrana defender, who is currently on loan at Wolves, claims the Argentine doesn’t need to work on his dead-ball shooting in training Nelson Semedo has spoken out on Lionel Messi’s ‘natural’ ability from set-pieces, insisting the Barcelona superstar never practises free kicks. Messi’s pinpoint accuracy from deal-ball situations over […] 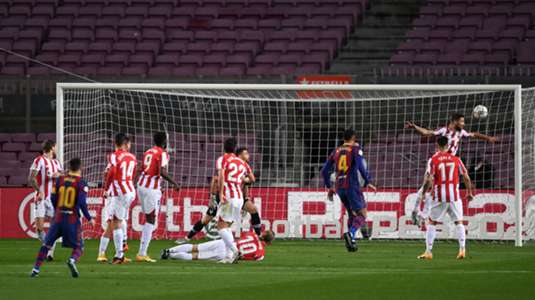