Former Mamelodi Sundowns midfielder Benedict Vilakazi was not entirely convinced by his former club’s performance, saying Saturday’s 2-0 Caf Champions League victory over Al Hilal was due to a huge gulf in quality between the two sides.

They are on top their group after fellow pool members – five-time African champions Tout Puissant Mazembe were held at home by Algerian side CR Belouizdad.

But for all Masandawana’s dominance, Vilakazi believes that the victory was down to the visitors lacking quality and offering little resistance, as opposed to the Brazilians’ brilliance.

“[Goalkeeper Dennis] Onyango was on holiday today. Sundowns had good defence and good midfield even though they were shaking in the second half after those changes,” Vilakazi told iDiski TV.

“We expected [Lesedi] Kapinga creating chances but he was coming back to sit deep defending. Sundowns were lucky that Al Hilal are not a good team. If they were a good team that is very strong, they were going to pick on that shaky Sundowns midfield.

“For quite some time, Sundowns were caught especially their full-backs. But that quality from Hilal was not there as compared to Sundowns. Look at how Shalulile, Erasmus making those runs, coming up one-on-one against the Hilal goalkeeper, look at the defenders coming in.

“Those things count, it shows that Sundowns players have went through the development stage. They knew how to trap the ball, how to pass, when to make a run, when not to make a run. Then Al Hilal, it is surprising how they get to this stage of the Champions League almost every year. Sometimes they even get to the quarter-finals and you ask yourself how?”

Al Hilal are, however, coached by a revered coach in African football Zoran Manojlovic, whose previous coaching stints include being in charge of Wydad Casablanca and Primeiro Agosto.

“Maybe the level of football in their country is still low. But good work from Sundowns, well done,” said Vilakazi.

“The technical team was positive because football is a game of mistakes. Sometimes you can make changes thinking that those changes would bring impact but those changes can let you down because the game and certain areas on the field as well as players will not be applying themselves well.”

Sun Feb 14 , 2021
The Dutch head coach has heaped praise upon the six-time Ballon d’Or winner after his stunning display against Alaves Ronald Koeman has insisted that Lionel Messi is “excited and happy” at Barcelona despite ongoing transfer talk. Messi took his tally to 15 goals from 20 La Liga matches in 2020-21 […] 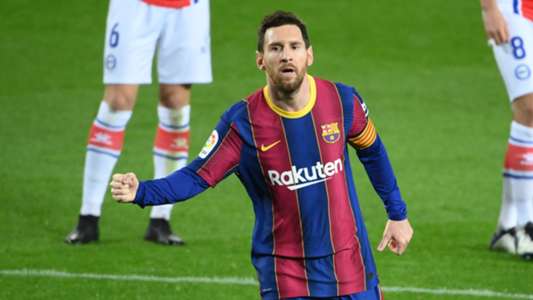