Brahmanand Sankhwalkar is a legendary name in Indian football and one of the stalwarts from Goa to grace the sport.

He began a celebrated playing career of 25 years with Panvel Sports Club before even turning 16. He went on to spend 17 years with Salgaocar SC and had a three-year stint with Churchill Brothers. Sankhwalkar ended his career with Anderson in 1995. This is apart from his exploits with the state and national teams.

However, there was a phase in his career when the goalkeeper nearly gave up his passion to pursue his education. But sound advice more than once from former Panvel Sports Club secretary, Antonio Bothelo, helped script Sankhwalkar’s destiny.

“He (Sankhwalkar) had an offer to join Dempo [in 1973] and at the same time he wanted to stop playing. Me and Levino (Dias) went to his house and Taleigao and told him, ‘Look, you play one more year for Panvel because if you go to Dempo, (Kuppuswami) Sampath is there, and Eugenio (Cardoso). You will lose your place and be benched all the time’,” Bothelo recounted to Goal.

“And then in 1974, again he wanted to give up football. He was called by Dempo again and we convinced him to stay but he was having second thoughts because he wanted to do college (complete graduation). Then I told him, ‘Look, college is not going to give you a job. Football will give you a job.’ He was still adamant so finally I had to tell him that I’m making him the captain of the team. He was among the junior-most among all the players. Finally he accepted the captaincy and decided that he will continue playing football. He would have given up football otherwise.”

Sankhwalkar himself admitted to Goal, “Because of football, some players don’t educate themselves. So whoever (aspiring footballers) I come across, I encourage them to get an educational qualification as well. After the game is over (upon retirement), you may be required to work in an office. Some footballers have given their best in their life and today they are at some top positions. But they have worked up their way.”

And as for Sankhwalkar, a government post was in the offing when he moved to Churchill Brothers in 1991. “After 17 years at Salgaocar, I was nearing the end of my career. I thought I would learn some coaching (attended a goalkeeping coaching course in Malaysia). When I joined Churchill, it was also the time when I joined the Sports Authority of Goa,” Sankhwalkar recalled the fag end of his playing career that concluded with a season at his village club Anderson Mariners.

Interestingly, Panvel Sports Club was not the first team Brahmanand Sankhwalkar had signed up for. His registration card for Clube Sao Miguel de Taleigao would still be at the Goa Football Association (GFA) archives somewhere.

“He had signed for Taleigao, but they had not taken his card from the GFA. He was still not 16. I had to go and get his father’s signature which was also there on the Taleigao form. His father was the Treasurer of Panvel Club either way and he agreed to sign the form. He said that he had already signed one more form and I told him that it was not used. The (Taleigao) card was not picked up so the (player) registration was not complete,” Bothelo revealed.

Sankhwalkar playing for Panvel was also a stroke of luck as his brother Vallabh, a former player of the club, recommended him as a makeshift goalkeeper in a friendly match against Saligao Sporting on January 1, 1971.

“Our goalkeepers (Shankar Verlekar and Ulhas Shetye) could not make it for the match in Saligao. One goalkeeper eventually turned up. So he played the first half. [For the] second half, we put Brahmanand and he saved everything. We lost the match 2-1 but he didn’t concede anything.”

The former GFA secretary further mentioned, “I said ‘we called him so we have to field him’ and it was a festival match. So it didn’t matter if we lost by more goals or not. I had heard a lot of him from Dr. (Alvaro Remigio) Pinto who was a prominent personality who promoted football in Taleigao. He was telling me that this boy would be a great goalkeeper one day.”

Brahmanand Sankhwalkar won the 1974 Bandodkar Gold Cup as Panvel captain at the age of 21 before joining Salgaocar where he had to displace first choice goalkeeper Gabriel Fernandes. In fact, Fernandes had just taken over the mantle from Subhash Sinari. At Salgaocar, he won the Goan league in his maiden season at the club. He won it four more times besides many other laurels including the Bandodkar Gold Trophy (1981, 1988), Saith Nagjee Trophy (1988), Federation Cup (1988, 1989) where Sankhwalkar kept clean sheets in both finals and the Rovers Cup (1989-90).

He led Goa to back-to-back wins at the Santosh Trophy in 1983 and 1984. In fact, the goalkeeper finished the 1984 tournament without conceding a single goal – 576 minutes, a record that still stands. He began his international career at the AFC (Asian Football Confederation) Youth Championship in Kuwait in 1975 and was included in various tours with the senior national team before taking up captaincy at the 1983 Nehru Cup, 1986 Asian Games in Seoul and against Bochum XI, a German team that visited India in 1986.

The Government of Goa conferred Sankhwalkar with the Bakshi Bahaddar Jivbadada Kerkar Award in 1977 and in 1996, the All India Football Federation (AIFF) chose him as the player of the decade (1985-1995) before he was bestowed with the Arjuna Award in 1997.

Sun Jun 14 , 2020
The former Irish international is set for his debut managerial role on Indian soil… Curtis Fleming is set to join Punjab FC as the head coach for the upcoming I-League season, Goal can confirm.  The 51-year-old tactician started his coaching career as an interim manager of Crystal Palace in 2012. After spending […] 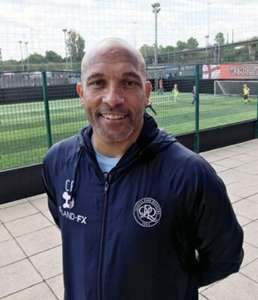