Besiktas returned to the summit of Turkey’s Super Lig as Georges-Kevin N’Koudou’s 89th minute goal inspired a 2-0 win over 10-man Kayserispor on Sunday.

The Black Eagles who have won their last four games came to the Kadir Has Stadium with the ambition of continuing their winning streak which would brighten their title ambitions.

French winger of Cameroonian descent N’Koudou presented the visitors with a chance to take a 12th minute lead after he was fouled in the penalty area by Dimitrios Kolovetsios. However, Ghana international Bernard Mensah missed the ensuing kick as goalkeeper Dogan Alemdar guessed the right way.

In the cagey first-half, chances were few as both teams went into the locker room after 45 minutes.

Knowing that anything short of victory would spell doom for their title hopes, Besiktas came out stronger in the second-half, yet were unable to break down the dogged hosts who relied on counter attacks.

Nonetheless, their breakthrough came in the 87th minute after goal-bound Congolese star Fabrice N’Sakala was brought down in the danger area by a clumsy tackle by one of the hosts’ defenders. After several VAR replays, referee Firat Aydinus pointed to the penalty spot.

The resultant kick was taken by the 25-year-old and he sent Alemdar the wrong way to hand Sergen Yalcin’s men the lead.

Super-sub Ajdin Hasic guaranteed all points for the visiting team by sending a low shot past the goalkeeper after capitalising on a defensive mishap by the Anatolian Star who had gone upfront in search of an equaliser.

Before the final whistle was sounded, manager Samet Aybaba had his men reduced to 10 after Miguel Lopes was given his marching orders for a second caution.

Despite his penalty miss, Mensah gave a good account of himself before he was substituted for Necip Uysal in the 77th minute, while N’Koudou who has now scored two goals in the 2020-21 season was in action from start to finish alongside N’Sakala. Cameroon’s Vincent Aboubakar was not listed for action.

For the hosts, Ghana’s Yaw Ackah saw every minute of action as Congo’s Harrison Manzala replaced Pedro Henrique with 13 minutes left to play.

Sun Jan 3 , 2021
The 18-year-old wonderkid is finalising the paperwork that will allow him to join the Red Devils in January Amad Diallo shared a photo of his flight to Rome on Sunday as the Atalanta teenager prepared to officially become a Manchester United player.  Diallo, 18, agreed to a move to Old […] 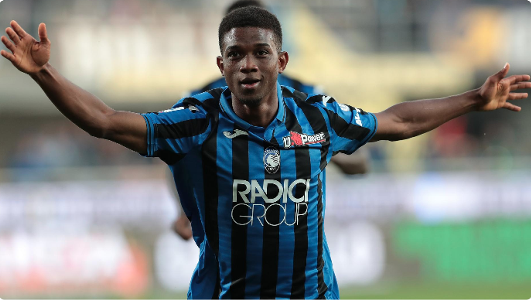