The Camp Nou giants believed they had a deal in place to sign the promising Brazilian forward, only to see him end up at Santiago Bernabeu

Barcelona were “stabbed in the back” when Vinicius Junior moved to Europe, claims the Blaugrana’s former head scout in South America, with those at Camp Nou left feeling “betrayed” as a hot prospect ended up at Real Madrid.

The promising Brazilian starlet had been on the recruitment radar in Catalunya for several years prior to the Blancos putting a big-money agreement in place during the summer of 2017.

Barca believed they were the ones supposed to be pushing that deal through, with their Clasico rivals benefitting from the tactics adopted by the teenager’s representatives.

Andre Cury, who spent many years spotting and acquiring South American talent for Barca, told Sport: “We were three-and-a-half years ahead of Madrid on Vinicius.

“His agents, Frederico Pena and Stefano Hawilla, betrayed us. They had a commitment with Barcelona. I was good friends with them but at the key moment they stabbed us in the back.

“Fifteen days before signing for Madrid, here in Brazil, Vinicius was saying that he was a Barca fan, that his idol was Neymar and that [Lionel] Messi was better than [Cristiano] Ronaldo.

“His agents and father were in Barcelona. Wagner Ribeiro phoned [Madrid president] Florentino [Perez] to alert him. And he invited them to Madrid on the Saturday.

“They told us they would go, but that nothing would happen because the player was already with Barcelona. We had their word. They returned to Barcelona, closed the agreement with us, shook hands… and then they disappeared. They betrayed us.”

Pena has previously claimed that Barca offered more money than Madrid, but that Vinicius preferred the project that was put forward in the Spanish capital.

What else has Cury claimed?

Vinicius is not the only addition made by Real that has caused confusion for Cury.

He claims that a similar deal for Rodrygo was put in place back in 2019 as the Blancos did not believe that their other Brazilian starlet would live up to expectations.

He added: “They didn’t have confidence in Vinicius and feared they would have signed the wrong player and that we’d get the right one.

“For that reason, they have two players of the same age, in the same position and both in non-EU spots.

“I knew Rodrygo for a long time and he had the profile to play for Barca. I started to negotiate with his agent, Nick Arcuri. The club was in Brazil twice to meet with the Santos president. It was me, Oscar Grau and Pep Segura. I told them we had to leave with the deal closed. We didn’t. And Madrid arrived.”

Vinicius has faced questions of his end product throughout a testing spell in Spain, but delivered on a Champions League stage when Real needed inspiration against Liverpool.

He bagged a brace in the first leg of a heavyweight quarter-final showdown that has helped Zinedine Zidane’s side to establish a commanding 3-1 lead.

The South American has managed 15 goals for the Blancos in total, through 107 appearances, while Rodrygo – who has a Champions League hat-trick to his name – has found the target on eight occasions in 49 games.

Mon Apr 12 , 2021
The German thinks the man who scored twice against his team in the first leg of their Champions League quarter-final “has everything” Hansi Flick has talked up Kylian Mbappe’s talents ahead of Bayern Munich’s trip to Parc des Princes on Tuesday, expressing his belief that the Paris Saint-Germain star “will […] 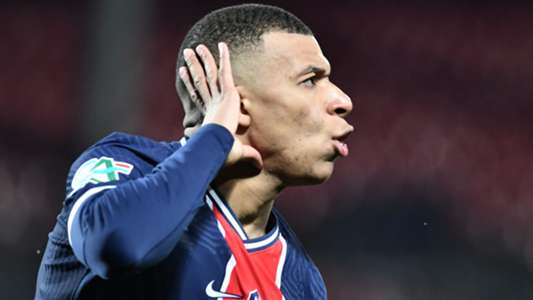