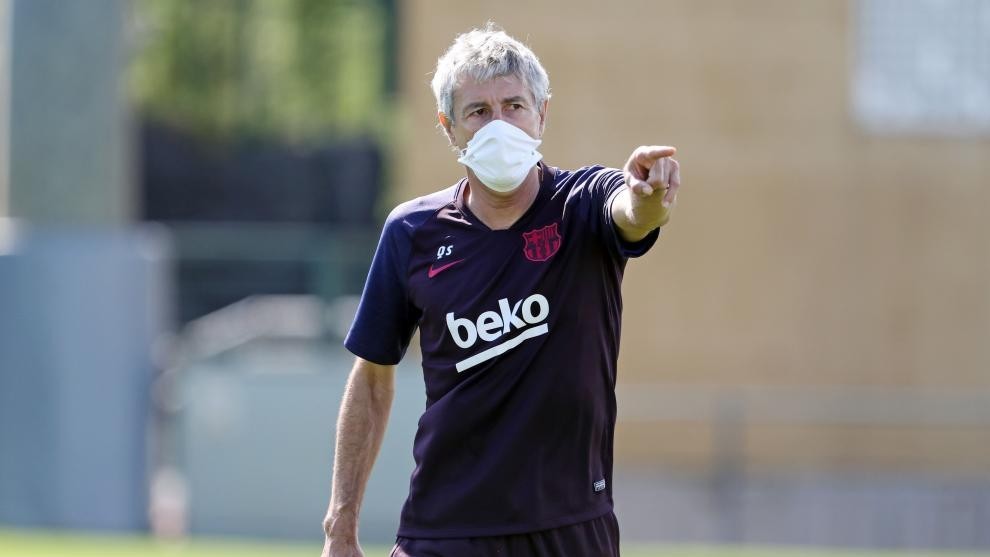 Barcelona will face Real Mallorca on Saturday and Quique Setien has made clear that both Lionel Messi and Luis Suarez are fit enough to start the game.

The Argentine suffered a minor quadriceps injury, but returned to training this week, while the Uruguay international has fully recovered from a lengthy injury.

“Surely [Suarez] is ready to be a starter, but not for the full 90 minutes,” he said at a virtual press conference.

“We will not take risks after five months.

“It will be good for him to play and he will need games to be as before.

“[Messi] is there to play, he is perfectly fine.

“He has trained well, there is no problem.

“Messi and many of these players know how to slow down when necessary.

“For some players, the longer they are on the pitch the better.”

Nelson Semedo has recently breached LaLiga’s guidelines by attending a gathering of over 20 people, but Setien insisted that this will not affect his decision on whether to start him on Saturday.

“I have not decided if [Semedo] will play or not, but [my decision] will not be based on the unfortunate or careless incident he has had,” he added.

“It is a situation that will not affect me to make the decision in football terms.

“He is tremendously prepared.

“He has apologised to everyone.”

LaLiga Santander has returned after three months and Setien believes that the break has helped Barcelona.

“I think this break has been good for us, especially in everyone’s mind,” he noted.

“It has given us time for reflection and analysis that has been very good for us.

“But other teams have also been able to do that.

“Real Mallorca have been able to isolate and freshen up themselves to offer the best image.

“There are hypotheses of what can happen.

“We’ll see if we will be better or remain the same.”

Fri Jun 12 , 2020
Photo: Brandon Dill/Associated Press Joakim Noah can’t wait to get back on the court for the Los Angeles Clippers and play for the first time since the 2018-2019 season. Noah is on one of the longest 10-day contracts in NBA history, as he was signed on March 9, two days […]