Pierre-Emerick Aubameyang notched up another major career milestone when he scored his first Premier League hat-trick in Arsenal’s game against Leeds United.

The Gunners captain cut in off the left flank to rifle home the opener inside the first quarter-hour at the Emirates Stadium, before converting from the penalty spot just before the break after Bukayo Saka was fouled by Illan Meslier.

Hector Bellerin slotted home a third on the stroke of half-time, but it was Aubameyang who wrote himself a new chapter after he headed home Emile Smith Rowe’s cross at the far post after the restart in north London, to take him to 200 goals across Europe’s top five leagues.

The Gabon international’s first top-flight hat-trick – becoming the first Arsenal player to do so since Aaron Ramsey achieved the feat against Everton in February 2018 – takes him to 62 Premier League goals for the club.

Having joined halfway through the 2017-18 season from Borussia Dortmund, Aubameyang hit the ground running, with 10 top-flight finishes in 13 games across the rest of the campaign.

With a full term ahead, he more than doubled that tally in 2018-19, winning the Premier League Golden Boot with 22 goals, before notching the same total in 2019-20.

He has endured a dryer spell so far this season, with his treble against Leeds taking him to eight for the campaign, while he has bagged an additional 19 goals in total across cup and European competitions since his arrival.

The 31-year-old’s efforts this weekend now mean that he has notched up a European top-five league double century across a decade-plus career, stretching back to a loan spell at Lille in 2009-10.

There, he only netted twice for the Ligue 1 outfit, matching the same figure for Monaco on a subsequent loan spell in 2010-11, but richer rewards were to come following his transfer to Saint-Etienne.

Aubameyang found the back of the net on 37 occasions across a two-and-a-half year stint with the club, earning him a move to Borussia Dortmund where he only soared to more prolific heights.

In the Bundesliga, he fell just short of a century, smashing in 98 goals in 144 games, before swapping Germany for England and a move to Arsenal in 2018.

Given Aubameyang’s general drought across the 2020-21 campaign to date, his hat-trick against Marcelo Bielsa’s side will be a much-needed boost for both the player and his coach Mikel Arteta.

Having been out of the Spaniard’s side in recent weeks amid a leave of absence to help support his mother with a health issue, his performance marked an emphatic return to his best form ahead of Thursday’s Europa League return.

Arsenal will play Benfica in Rome, owing to Covid-19 protocols, and an in-form Aubameyang may be key to the club’s hopes of ensuring continental football next season one way or another.

The Gunners face a tough battle to achieve a European berth amid a particularly tight mid-table tussle, with a majority of Premier League sides still in contention for a Europa League spot at the very least.

Sun Feb 14 , 2021
The 24-year-old scored twice to open her goal account in Israel as her side cruised past their visitors in the league encounter Ini Umotong broke her FA Women’s Championship duck with a brace as Lewes bowed 3-2 to London City Lionesses on Sunday. The Nigerian striker joined the Rockettes in […] 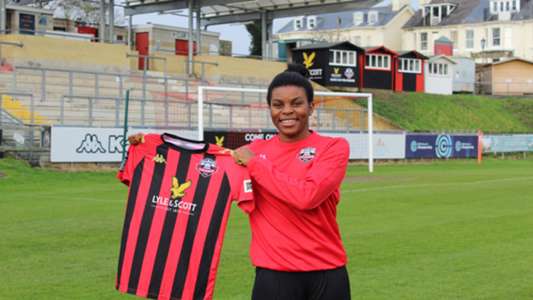