Aston Villa boss Dean Smith has vowed to take action after news of Jack Grealish’s injury was leaked before Sunday’s game against Leicester.

Villa skipper Grealish was a notable absentee from the starting line-up at Villa Park, though rumours he was set to miss the game were swirling online earlier in the weekend.

Leicester went on to win 2-1, with Smith confirming after the game that he will “reprimand” anyone who is found to have leaked information from the training ground.

Speaking to reporters after the game, Smith said: “I was made aware on social media there were rumours he was not going to play. If that is coming out of our training ground I will find out where it is coming from and reprimand whoever it is coming from.

“It certainly does [help the opposition]. It is something I would not be happy with.

“It is something I wouldn’t be happy with and we will certainly get to the bottom of it.”

How long will Grealish be out for?

Smith confirmed Grealish was sidelined with a leg injury, though he would not be drawn on a timescale for his recovery despite rumours he could be out for a month.

“We will just assess it, I am an eternal optimist and I’ll hope he is back for Leeds next week but I’ll leave it to the medical staff.”

When pushed on how long Grealish would be out for, Smith added “We don’t believe it’s a long-term injury. We’re just going to assess him as he goes.

How important is Grealish to Aston Villa?

Losing Grealish to injury for even a few weeks is a huge blow to Villa given the influence he has on the side.

No Villa player has been involved in more goals this season than the midfielder, who has scored seven and assisted 10 more.

Since Smith took charge in October 2018 Villa have averaged 1.5 points per game when Grealish has featured compared with 0.9 points per game without him. They have also lost all three Premier League matches without England international since the start of last season.

Sun Feb 21 , 2021
The Nigerian-born Spaniard provided the consolation goal for her side despite crumbling against their hosts on Sunday Andrea Okene scored the only goal for Levante in a 5-1 defeat to Albacete in their Spanish Reto Iberdrola encounter on Sunday. The Nigerian-born Spanish prodigy has continued her impressive displays in front […] 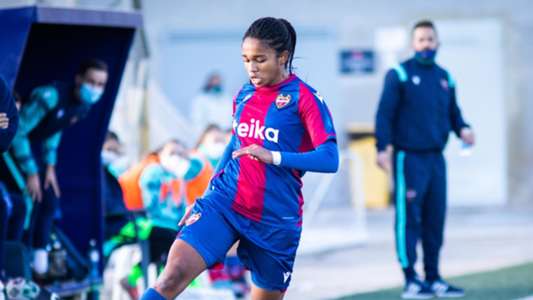