Ghana captain Andre Ayew reveals he is good to rise to the occasion for Swansea City when needed after scoring a last-gasp penalty to ensure a 2-1 win over Swansea City in the Championship on Saturday.

With things looking headed for a home draw at Liberty Stadium, the 31-year-old stepped up to convert a penalty in the seventh minute of injury time to dramatically snatch three points for the Jack Army.

It was his second straight game of scoring an injury-time penalty to win a game for his side.

“I’m happy to take the responsibility on my shoulders. I will never shy away from fronting up and facing the pressure situations, so it’s my duty to take penalties at difficult moments,” Ayew has said, as reported by his club’s official website.

“Being the penalty taker is not always rosy, but it’s something I must do for the team.

“I’m not going to give away any secrets on my penalties, but all I want to see is the ball hit the net.

“It was such a late moment in the game, and it was a great relief to see the ball go in.”

Three days earlier on Wednesday, Ayew was similarly called into late penalty duty against Stoke City as he planted a 96th-minute effort at the back of the net to ensure a 2-1 win away.

“The wins this week – it’s all for the fans. We know they are watching from home and can’t be at the stadium, but we know they are smiling after these games,” said Ayew.

“I’m sure they’ve enjoyed this week – sorry we’ve left it late with the winning goals! I’m sure they celebrated even louder at the final whistle because of the lateness of the goals.

“But we want them to know that we are always giving our all for our club. I’m sure they see that in our performances.”

Saturday’s penalty was not Ayew’s only major contribution to the game as he scored in the 40th minute to give Swansea the lead.

The attacker has now registered 13 goals to his name so far this season, having featured in 32 matches involving 31 starts.

Sun Mar 7 , 2021
Thanks for joining our commentary this evening. Until next time, goodbye. Manchester City have the chance to get back to winning ways against Southampton on Wednesday on home soil. Manchester United are next in action against AC Milan in their Europa League round-of-16 contest on Thursday at Old Trafford. Manchested […] 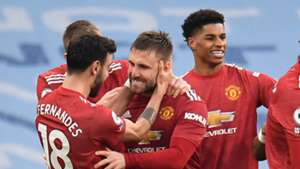