Andre Ayew and Swansea City’s chase for Premier League promotion suffered a blip on Saturday by a 4-1 away loss to Huddersfield Town.

Conor Hourihane drew the visitors level after Fraizer Campbell put the home side in front but Ashanti Duane Holmes’ double and a Lewis O’Brien strike sealed three points for The Terriers.

Despite the matchday 31 loss at John Smith’s Stadium, Swansea still hold a place in the promotion play-off zone in fourth position. Huddersfield, meanwhile, are 15th on the log.

Ayew, the Jack Army’s joint-leading scorer with nine goals, lasted the entire duration of the match on Saturday. The match was his 29th league appearance of the season, the start his 28th.

Campbell put the hosts in the lead in the 22nd minute, slotting into the net after a set-up by Gonzalo Pipa.

When all looked headed for a 1-0 score heading into the break, Hourihane levelled things for Swansea with a strike on the stroke of half-time.

Just three minutes after the interval, Campbell turned provider, setting up O’Brien to make it 2-1 before Aaron Rowe assisted Holmes’ first goal in the 52nd minute.

Three minutes later, Holmes registered his second goal of the day and his side’s fourth, his effort coming on an O’Brien assist.

Swansea will hope to promptly bounce back to winning ways when they face Coventry City on Wednesday.

“It’s a marathon and we need to keep going to the end. The team who is going to be strong mentally and physically will be able to do something great,” Ayew said ahead of Saturday’s game.

“But with so many games to play, I think it’s important that we only look at the next game. And we will do that for the rest of the season.

“We are doing good but we won’t get carried away. We must keep working and work harder because we’ve got 19 games left and there are a lot of points to play for and get before we can think about anything.”

Swansea were relegated from the Premier League to the Championship in 2018. 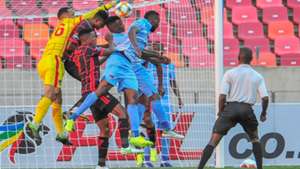