Everton are among the Premier League clubs seeing a move for Kalidou Koulibaly mooted, but Carlo Ancelotti says a centre-half that he considers to be a “good player and a “good friend” is not part of his summer transfer plans.

A big-money switch to England for the highly-rated Senegal international has been speculated on for some time, with the likes of Liverpool and Manchester United reported to be long-standing suitors.

The Toffees are said to have joined the chase, with Ancelotti having previously worked with Koulibaly at Napoli, but the man in charge at Goodison Park claims to be happy with a centre-half crop that already includes Michael Kean, Ben Godfrey, Yerry Mina and Mason Holgate.

Ancelotti has told reporters when quizzed on the Koulibaly to Everton talk: “Honestly I have a lot of good memories of Koulibaly.

“He was a good player, a good guy, a good friend.

“But if you see our squad there, we are well covered because we have good centre-backs who are young with a lot of talent.

“For this position we are well covered for the future.”

Any other business at Everton?

The Merseyside outfit are in the process of piecing together their plans for the summer window.

Ancelotti has admitted that he hopes to be in a position to further bolster his ranks after putting Everton in contention for European qualification this season.

Josh King is one option for him to mull over, with the Norwegian striker having been snapped up from Bournemouth on a short-term deal over the winter.

No extension has been put in place as yet, with the 29-year-old forward taking in eight substitute appearances for the Toffees so far.

Asked if talks have been held with King, Ancelotti said: “We didn’t talk about the future, no, because we are not talking about that at this moment.”

Everton will be back in Premier League action on Monday when they take in a trip to Brighton.

Sat Apr 10 , 2021
The Senegal international scored twice, notwithstanding, the Star of the South suffered a defeat at Hatay Ataturk Stadi Mame Diouf scored a brace while Obinna Nwobodo featured as Hatayspor lost 3-2 against Goztepe in Saturday’s Turkish Super Lig game. Diouf has been delivering impressive performances since he left Stoke City to […] 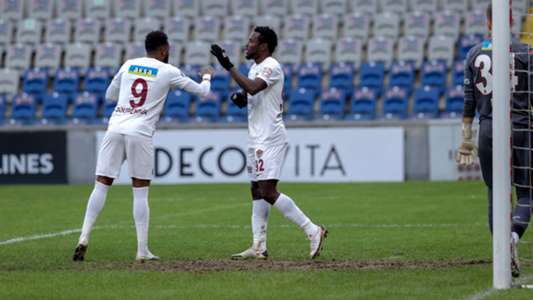