Nigeria new duo of Toni Payne and Patricia George have set their sights on helping the Super Falcons to a historic feat in their first-ever appearance at the Turkish Women’s Cup in Antalya.

In April 2019, Payne and George were invited by erstwhile coach Thomas Dennerby for a pre-Women’s World Cup camp in Spain following the successful completion of their nationality switches.

However, the duo could not honour the call-ups due to administrative reasons until they were included in the 23-player squad for the Turkish Women’s Cup by new coach Randy Waldrum.

The American-born Nigerians can make their first senior international debuts on Thursday morning against CSKA Moscow, after a long wait to represent the West African nation.

While expressing her joy over joining the Super Falcons’ fold, the SC Sand defender admitted she is eager to hit the ground running with the team following her maiden training on Tuesday.

“I am very grateful to this opportunity to play in this [Turkish Women’s Cup] tournament for Nigeria,” George told the media.

“I’m delighted and grateful to coach Randy for selecting me to be part of this squad to Turkey. I expect to probably play as an outside back or on either side because I am a pretty versatile player.

“I expect the competition to be tough and competitive. It will bring my game to another level, especially playing with the Super Falcons.

“My ambition as a soccer player is to get to the highest level and I’m here to do that with Nigeria and also be the best I can be.”

On her part, Sevilla forward Payne, who featured for the US at various youth levels, also admitted her delight after teaming up with the team, describing the opportunity as a dream come true.

“I am very excited to be here. It’s always been my dream to represent Nigeria at the senior level I’ve grown up watching both men and women’s team,” Payne said when asked in a virtual press conference.

“For me, it’s an amazing opportunity and I thank God and my family for this.  So far in Turkey, it’s really been a great experience. “

“The teammates are very amazing, welcoming and open. I feel like I’ve been able to integrate myself into the team very well.

“We have a new coach. He’s been able to come into the team with new ideas and be able to work really well with us.

“We have very high expectations for ourselves, obviously want to win the tournament and also be better as a team and work together.”

When Nigeria launch their campaign against the Russian side the duo will be anxious to earn their international debuts for the African champions in Waldrum’s first game in charge.

Wed Feb 17 , 2021
All participating nations in India’s group have agreed to play the rest of the matches of the world qualifiers in a centralised venue… India are set to play their rest of the World Cup qualifying matches at a centralised venue in Qatar in June, Goal can confirm. All participating teams in India’s group have […] 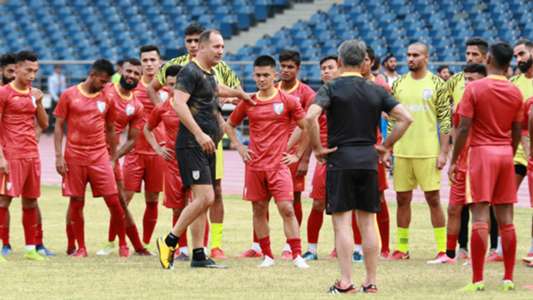