Etienne Eto’o scored twice as Cameroon saw off Mozambique 4-1 in an African Cup of Nations U20 group tie on Saturday in Nouakchott.

The loss saw Mozambique, who were debuting in the tournament, finish at the bottom of Group A as Cameroon, who had qualified for the quarter-finals already, remained at the top.

Two first-half goals by Eto’o, the son of Cameroonian legend Samuel Eto’o, condemned Mozambique, who were to concede two more goals in the second half.

Eto’o scored with an accurate free-kick in the eighth minute before he converted a penalty just before the half-time break to hand his side a 2-0 lead at the interval.

It was Eto’o’s time to turn a provider when he squared the ball for Kevin-Prince Mila who scored the third for the Young Lions shortly after the break.

After conceding, they re-organised quickly and scored the fourth through Abdoulaye Yahya to end the group games with a huge win.

Meanwhile, Uganda qualified for the knockout stage after a hard-fought 2-1 win over Mauritania in Nouakchott.

Both sides needed a win to assure themselves of a place in the next phase of the competition but it is the Cecafa side that earned a spot after a tight encounter.

The hosts got an opener in the first half when Silly Sanghare scored from a penalty before the Hippos equalised on the hour mark.

Derrick Kaooza scored the winner for the East Africans deep into the second half to seal a place in the knockout stage.

Uganda were unable to utilise chances in the early moments and went behind when Oumar Mbareck was brought down by Aziz Kayondo with eight minutes left to the end of the first half.

Uganda needed 15 minutes to equalise in the second half after a good move on the right wing by Steven Sserwada, whose shot found the bottom-right corner.

The Morley Byekwaso side won a penalty in the 88th minute after a Mauritanian handled the ball as he attempted to clear a Ugandan corner. Kakooza converted successfully to send them into the next round of the junior tournament.

Sun Feb 21 , 2021
A Reds legend thought his old club lacked “any fight or any real aggression” during their Merseyside derby defeat at the weekend Liverpool have become an “easy touch” for their rivals, according to Graeme Souness, who says “everyone wants to play against” the reigning Premier League champions. Jurgen Klopp’s side […] 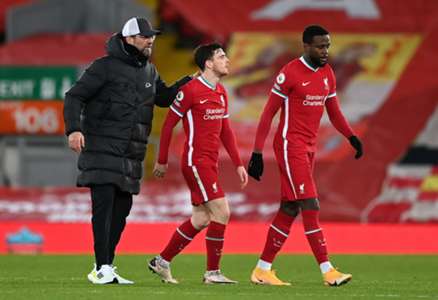