AFC Leopards chairman Dan Shikanda has promised fans of an ‘interesting season ahead’ as they build a team capable of challenging for the Kenyan Premier League (KPL) title.

Shikanda stated the club will sign only experienced players to boost the current squad that has a majority of young players. In that regard, the chair believes the fans have every reason to be hopeful as they continue to remain supportive.

“We are looking to bring at least three to five experienced players and blend them with the youthful team we have,” Shikanda told the club’s Online TV.

“I can tell our fans ‘be ready for an interesting season’. A season whereby you will be confident of our team fighting for the championship.”

The former striker also stressed the need for Ingwe to own its facilities adding they are old enough and should not be training on a pitch payable every day.

“This is a club without even a training facility and so we are embarking on a journey that will fix the physical infrastructure of the club,” he explained.

“At the end of our elective term, we actually hope to give this club something they can be proud of as their identity as a football club.

“For 56 years, surely we need to have a place where AFC Leopards can train. We pay around seven to eight thousand per day for the team to train and so if we have our own training base, I think it will be a big, positive thing for our club.”

The official went further to explain how they will approach their transfer business.

“As you know, this year we have been competitive. Yes, we were in position six when the league was stopped but we have to move forward and strengthen our team,” said Shikanda.

“We realised the team was a bit youthful and we need to mature it so that we can go and directly challenge for the title.”

The Ingwe chair also mentioned and thanked individuals who came to their rescue when they faced difficulties in a season they ran without a sponsor.

“We are thankful to everyone who stood with us especially when our sponsor left. My thanks go to President [Uhuru] Kenyatta, his deputy and Speaker of the Senate [Ken Lusaka],” he concluded.

“I also thank [Eugene] Wamalwa and [Musalia] Mudavadi as it has been interesting to have all these people come together and ensure this brand, AFC Leopards, stands.

“The Minister of Sports [Amina] Mohammed also helped us when we were unable to have the team travel to Kakamega and she availed the Kasarani Stadium for us during our game against Kariobangi Sharks.”

Real Madrid: Zidane is now on the podium of Real Madrid coaches with most games in charge

Mon Jun 15 , 2020
Real Madrid Only Del Bosque and Munoz are ahead of him Perez hands Zidane a commemorative shirt for his 200th game in charge. realmadrid.com After Real Madrid’s 3-1 victory over Eibar on Sunday, president Florentino Perez went down to the dressing room to congratulate the players and hand out commemorative shirts […] 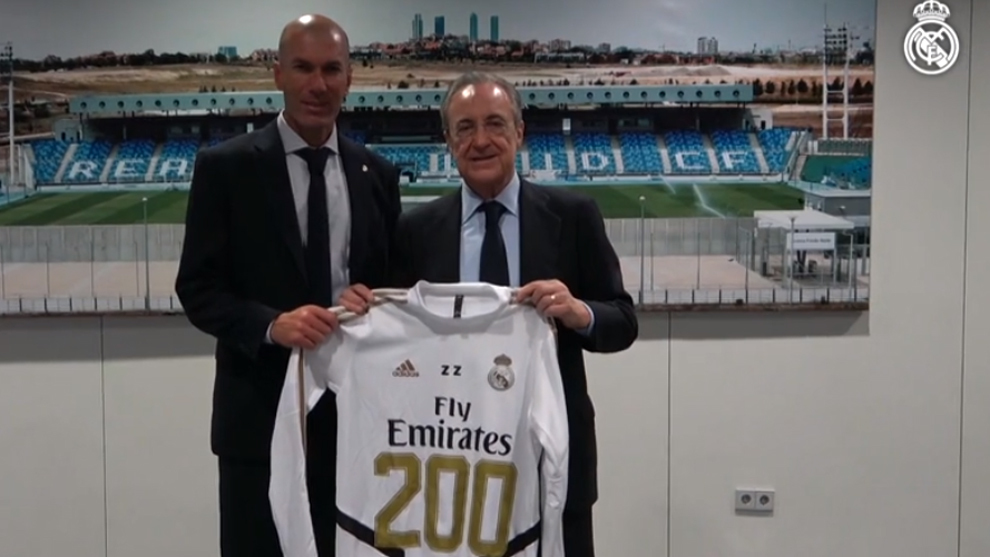