Tosin Adarabioyo is upbeat about Fulham’s chances of surviving Premier League relegation after they defeated Sheffield United 1-0 in Saturday’s outing.

Ademola Lookman’s second-half goal boosted the Cottagers’ fight to keep their top-flight status, and it moved them to three points behind 17th-placed Newcastle United.

After their 2-0 loss to Leicester City earlier this month, Scott Parker’s men have turned in fine performances in their last four outings with just a goal conceded – in the 1-1 draw against Burnley.

Adarabioyo, who has been a key fixture in the Cottagers’ defence this campaign, relished their impressive defensive record which has seen them gather eight points from their last four matches.

“It was really massive. We all did fantastic. We know where we are in the league and where we want to get to, and those three points are a big step in that direction,” Adarabioyo told the club website.

“It’s one of the turning points to our season. There’s been a few, we’ve been on a good run of form with two wins and two draws. We’ve found some identity and confidence so this could be one turning point, but I think we’ve had one already. Hopefully we can continue to chip away.

“Seven points in a week is massive. We’ve come out of a three-game week so to see us unbeaten is huge for us.

“Palace coming up is a massive game, it’s another game to look forward to, we’ll try and get some points out of it and keep moving in the right direction.”

Parker’s men visit Selhurst Park for their next Premier League fixture against Crystal Palace next Sunday.

Despite growing criticism around Fulham’s league position, Nigerian descent has urged the club faithful to keep believing in the team.

He added: “That’s down to them what they want to believe in terms of our survival chances. I hope our fans fully believe we can do it after seeing us play.

“The outside world and media, that’s down to them to say what they want. We’ve shown more than enough to demonstrate we’re capable of doing that.

“We know what we’ve got left of the season and we’ll look to get the job done.”

Sun Feb 21 , 2021
The Nigeria international was forced off in the closing stages of his side’s loss to the Goddess at Gewiss Stadium Victor Osimhen has been rushed to the hospital after a collision with Cristian Romero in Napoli’s 4-2 defeat to Atalanta in Sunday’s Serie A game. The forward’s debut season with […] 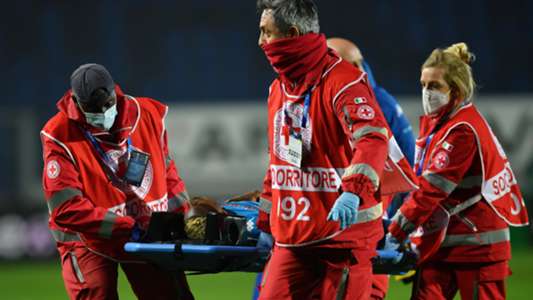