The Tottenham boss insists the forward had ruled himself out of contention for the midweek trip at Everton, despite what was suggested on social media

Jose Mourinho has taken a swipe at Gareth Bale after saying an Instagram post by the forward is “totally wrong” and that there was a “contradiction between the post and reality.”

Bale posted an image of himself in training on Tuesday with the caption “good session today”, which appears to suggest he was fit and available for selection.

However, after leaving the Wales international out of the squad for Wednesday’s trip to Everton, Mourinho said Bale had asked not to be involved and requested a scan on an injury with the Spurs boss doubling down on those assertions when speaking to reporters on Friday.

Editors’ Picks
What did Mourinho say about Bale?

When asked about Bale’s potential availability for the weekend trip to Manchester City and for further clarification on the reasons behind his absence at Goodison Park, Mourinho said: “We have a training session on [Friday] afternoon to see if he feels ready or not.

“I hope the press conference is about the game and not about individuals, but I have to admit his post created the need to be addressed because there was a contradiction between the post and reality.

“Since the beginning of the season, in relation to everything I try to be very private and keep everything in doors, but I felt that I need to address the situation.

“Probably the post was not even his responsibility, I don’t know, but the post was showing that training session great, so ‘I’m ready’ and it was totally wrong.

“So when I was questioned I had to say the reality of the things which I repeat for the last time and I hope there are no more questions about it because the situation was exactly the way I told: he was not feeling good, he asked for a scan, he had the scan, the scan didn’t show an injury but his feelings were still there.

“Coaches, sports science and medical people can never go against feelings because the players feelings are more important than all of us, so he was not ready for the game and it was as simple as that. If he’s ready for tomorrow’s he’s selected for tomorrow.”

How many games has Bale played this season?

Hopes were high among Tottenham fans when Bale made an emotional return to north London from Real Madrid in September, but things have not quite gone to plan so far.

The 31-year-old has struggled for regular action, his cause not helped by a number of niggling injuries.

He has made just 15 appearances in all competitions, scoring four goals, and hasn’t featured since the 1-0 defeat at Brighton on January 31.

There was some good news for Tottenham, with Mourinho reporting that Harry Kane showed no ill-effects after his substitute appearance against Everton on Wednesday.

The England captain was introduced after 53 minutes in what was just his second game back from an ankle injury, but ended up playing for well over an hour because the FA Cup tie went to extra time.

“Of course he played 60 minutes or so, which he didn’t want and I didn’t want as it was a game that pushed us in that direction, but no negative feelings after the game,” Mourinho said of Kane. “Just the normal stiffness. I believe he can start.”

Fri Feb 12 , 2021
Two league matches were played on Friday evening with Abafana Bes’thende and Vhadau Vha Damani recording wins Lamotville Golden Arrows made it three wins in a row in the PSL when they defeated Stellenbosch FC 3-1 at Danie Craven Stadium in the Western Cape. Abafana Bes’thende grabbed an early lead […] 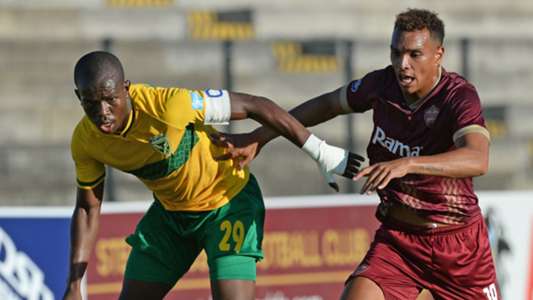