Riyad Mahrez has been praised by football fans following his breath-taking performance against Paris Saint-Germain.

The Algeria international was on target twice as Manchester City defeated the Parisians 2-0 to reach their first-ever Champions League after a 4-1 aggregate result.

Having lost the first leg 2-1 at home, Mauricio Pochettino’s men travelled to England with the ambition of overturning their deficit.

However, that ambition faded into thin air as the 30-year-old scored in each half to send the Ligue giants packing.

Excited with his awe-inspiring display, the world has taken to Twitter to sing Mahrez’s praises.

Mahrez’s defensive contribution has been unbelievable.

Mahrez’s defensive contribution has been unbelievable.

Mahrez has been so clinical as of late 🔥.

I won’t forget when Mahrez was linked to summer last summer and our fanbase was saying no. Not kidding, they actually said no.

To think Arsenal were close to signing Mahrez once upon a time. Now we’re stuck with the likes of Pepe. Incredible

Mahrez didn’t eat for the whole day knowing he was going to feast on PSG’s defence to break his fast.

Someone said Mahrez accidentally broke his fast by feasting on PSG 😭😭 pic.twitter.com/8WfiDftlO6

Mahrez how many goals has PSG eaten???

Thank God the Afcon is not in June.

We can’t deal with this type of Mahrez for now

Mahrez is truly is a Big Game Player and a silent Gem for Man City.
Loved how he shows up in the most crucial times for his team pic.twitter.com/KSaZmOKEey

Zinchenko a big shout for MoTM, outside Mahrez. Immense over two legs, with a hot head we can blame on “passion”.

If Riyad Mahrez doesn’t get player of the #UCL tournament then we’ll create our own European competition.

Mahrez chilled for a whole season just to smack up PSG. Iconic.

Tue May 4 , 2021
Both the ex-Manchester United player and Marco Verratti alleged wrongdoing on the part of the match official on Tuesday Paris Saint-Germain star Leandro Paredes was the recipient of a foul-mouthed insult from referee Bjorn Kuipers during his side’s Champions League defeat to Manchester City, his team-mate Ander Herrera claims.  A […] 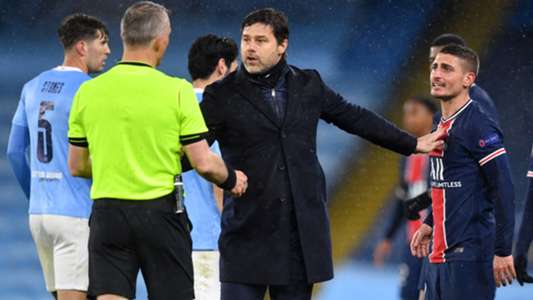