“101 Greats of European Basketball,” a limited-edition collection published in 2018 by Euroleague Basketball, honors more than six decades’ worth of stars who helped lift the sport on the Old Continent to its present-day heights. Author Vladimir Stankovic, who began covering many of those greats in 1969, uses their individual stories and profiles to show that European basketball’s roots run long and deep at the same time that the sport here is nurtured by players from around the world, creating a true team dynamic unlike anywhere else. His survey covers players who were retired before the book was published and who inspired the many others who came after them. Enjoy!

The number of American players who played in Europe is, at this point, almost unimaginably huge, but we can count on one hand the ones who won three Final Fours. There are now three of them: Anthony Parker with Maccabi Tel Aviv in 2001, 2004 and 2005, Mike Batiste with Panathinaikos in 2007, 2009 and 2011; and Kyle Hines with Olympiacos in 2012 and 2013, plus CSKA Moscow in 2016. As good as the others have been, only Parker can claim to have been votes as a full-season EuroLeague MVP two times, the only player to have that distinction so far.

Basketball in the genes

Parker, who was born on June 19, 1975, in Naperville, Illinois, was an excellent shooting guard. With a father who played basketball at the University of Iowa, a mother who was a basketball cheerleader, a brother, Marcus, who also was a player, and a sister, Candace, who became a star in the WNBA, there’s no doubt that Anthony had basketball in his veins.

As all future stars, Parker already stood out in his high school years in his hometown, and even more at Bradley University, where he averaged 11.0 points and 4 rebounds in his freshman year. However, a couple of years later he was already putting up 18.8 points, 6.5 rebounds and 3.5 assists per game. His best weapon was his three-point shot (42%). You could see he was a great shooter from the beginning. In 1996, he was a member of the U22 USA team together with Tim Duncan and Paul Pierce. In the title game against Canada for the Americas Championship, he scored 19 points and helped the USA advance to the 1997 World Championship for Junior Men.

In the 1997 NBA draft, Parker was selected by the New Jersey Nets with the 21st pick of the first round and immediately traded to the Philadelphia 76ers. However, his NBA dream didn’t become reality because of injuries and other circumstances. After spending three seasons between the NBA and the Continental Basketball Association, Parker made the best decision of his sports life: He moved to Europe. Likewise, the Old Continent was fortunate enough to see the arrival of one of the finest Americans ever to play here.

Parker managed to adapt little by little and produced a very good season with Israeli League and national cup titles. But the big achievement was winning the 2000-01 FIBA SuproLeague in that season of two top-level competitions on the continent. In the Israeli League, Parker averaged 14 points (48% three-point shooting), 4.1 rebounds and 2.7 assists. In the SuproLeague he had similar numbers: 14 points and 5.3 rebounds. The FIBA Final Four was played in Paris with Maccabi, Panathinaikos, CSKA Moscow and Efes Pilsen. In the semis, Maccabi defeated CSKA 86-80 with 17 points from Nate Huffman and 14 by Parker. In the final, Maccabi beat Panathinaikos 81-67 in the start of a rivalry that would mark the start of the 21st century. Huffman and Arriel McDonald scored 21 apiece, while Parker had 13 points.

Parker took a break for the start of the 2002-03 season to be with his wife for the birth of their first child. Midway through that season, he decided to return to action and accepted an offer from Virtus Roma. He played 27 games there, with his usual numbers: 14.5 points, 5.6 rebounds and 2.4 assists. To everyone’s surprise, at the end of that season, he returned to Maccabi, where he would become a key player in the coming years, a true star. I remember a talk with Dusan Ivkovic, coach of CSKA between 2002 and 2005, in which he admitted to me that it was a mistake of his not signing Parker, who had been offered to the Russian club. Parker was a player that could turn any contender into a champion.

In the 2003-04 season, Maccabi and Zalgiris faced off in the final game of the EuroLeague Top 16 with a spot in the Final Four at stake. The game was in Tel Aviv but Maccabi won 107-99 after Derrick Sharp’s miracle three-pointer forced overtime. Zalgiris legend Arvydas Sabonis, who was back to his boyhood club at 40 years old, was brilliant, and he admitted in his published memoirs that it was one of the toughest losses of his career. Maccabi entered the 2004 Final Four in Tel Aviv as the big favorite, and it lived up to the expectations. In the semis, Maccabi won 93-85 against a very strong CSKA team with 27 points from Parker, who had great shooting accuracy: 7 of 12 twos, 2 of 3 threes and 7 of 8 free throws to go with 6 rebounds and 2 assists. In the title game, the record-setting 118-74 rout of Skipper Bologna, Parker scored 21 points in 29 minutes. There was no doubt about the Final Four MVP: Anthony Parker.

Of course, Parker made the All-EuroLeague First Team after having averaged 16.0 points, 5.7 rebounds and 3.5 assists. There would be no season-long MVP award until the following year, or else Parker might have won that, too. His career highs in the EuroLeague were a performance index rating of 47 against ASVEL Villeurbanne on November 18, 2004, and 33 points in the same game, plus 10 assists early that year against Zalgiris. It was a pleasure to see him in action. He had elegance, technique, shooting, rebounding, passing, blocks and fighting spirit. Parker was an all-around player, someone who, even if not winning by himself, could change the course of a game, set the rhythm and find the path to victory for his team. And Pini Gershon, his coach those years, knew how to use those qualities very well.

The 2004-05 season was a copy of the previous one: a double crown in Israel and another EuroLeague title. At the 2005 Final Four in Moscow, Maccabi defeated Panathinaikos in the semis 91-82 with 20 points by Sharp, 14 by Maceo Baston and 13 each by Sarunas Jasikevicius and Parker. In the championship game, on May 8, Maccabi outplayed a powerful Tau Ceramica 90-78. Tau, coached by Dusko Ivanovic, featured Jose Manuel Calderon, Arvydas Macijauskas, Travis Hansen, Luis Scola, Pablo Prigioni and Tiago Splitter. However, there was a great team on the other side: Jasikevicius (22 points in the final), Baston (18), Nikola Vujcic (13), Nestoras Kommatos (13), Parker (12 points, 6 rebounds, 3 assists), Tal Burstein (8) and Sharp. With two titles in as many years, Maccabi became the first team capable of repeating as EuroLeague champion since Jugoplastika Split had won three in a row from 1989 to 1991. Although Jasikevicius was the Final Four MVP, Parker was chosen as the EuroLeague’s first full-season MVP.

In the 2005-06 season, Maccabi just fell short of matching Jugoplastika’s three-peat. The team reached the championship game again at the Final Four in Prague, but CSKA Moscow managed to win that night by 73-69 for its first continental crown in 35 years, a title that was dedicated to legendary head coach Alexander Gomelskiy, who had died a few months earlier. Parker, however, claimed his second full-season EuroLeague MVP award in a row for another spectacular campaign. He remains the only player in that award’s first 13 years to win it twice, let alone back to back.

For the 2006-07 season, Parker, at 31 years old, returned to the NBA. But in some ways, we could say that he had signed for the Toronto Raptors on October 16, 2005. Maccabi, as EuroLeague champion, was on a North American tour. It’s true that the Raptors were in the middle of the preseason, but nobody in Toronto expected such a tough game and such a tough loss. With 11 seconds to go and the score tied at 103-103, the 17,281 fans in the Raptors’ arena saw the best of Anthony Parker. The ball was in his hands on the right side of the court and it was clear that he would take it one-on-one. Morris Peterson’s defense looked good, but Parker used a side-step move to pull up for a favorite, high-arced shot of his. It was an impeccable shot, as if taken from a manual, one that youngsters should study to see perfection on an individual play. And, of course, it was good. Parker finished the game with 24 points and said after, “It was really fun, it’s fun to be part of history.”

It was the first loss by an NBA team at home against a team from Europe and the first such defeat, home or away, in more than 20 years since Maccabi itself had beaten Phoenix and New Jersey two nights apart in Tel Aviv during the 1984 preseason. Previously, Maccabi had also beaten the NBA defending champion Washington Bullets 98-97 in Tel Aviv in September of 1978. The big Jewish community in Toronto celebrated the magnificent win for Maccabi and was even happier when they learned that Parker would play with the Raptors in 2006.

At Maccabi, he wore number 8 and in Toronto, he wore 18, the Hebrew number symbolizing life. Soon, he was in Toronto’s starting five, earning the respect of his teammates, the media and opponents. He averaged 12.4 points, 3.9 rebounds and 1.3 assists. He was the team leader in three-point accuracy (44.1%) and ranked fourth in the league. Call it a coincidence or not, but that season Toronto was a division champion for the first time and was back in the playoffs after a four-year absence.

Anthony Parker was a great player who shined in Europe, Canada and – eventually – at home.

Liverpool working on finding the next Alexander-Arnold or Robertson - Klopp

Sun Jul 26 , 2020
The Reds manager has set his sights on helping the club discover even more defensive talent Liverpool boss Jurgen Klopp will work “100 per cent” on finding the next Trent Alexander-Arnold or Andrew Robertson and has high hopes for “real prospect” Neco Williams. The Reds’ star full-backs have once again […] 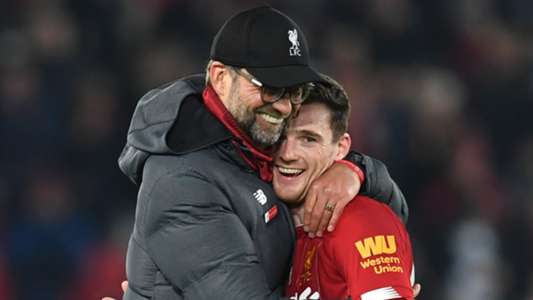